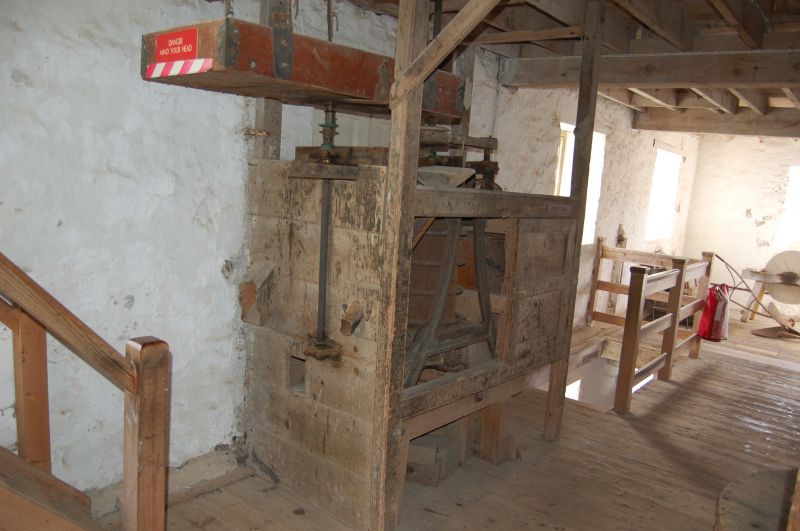 Location: The Tidal Barrier lies across the estury of the Carew River about 300 m W of Carew Castle. The French Mill stands on it near to the left (S) bank, over the deeper water where the natural river channel

The first mention of mills here is in 1541. In 1615 there is mention of a causeway with floodgates. Old prints show that at high tide shipping used the causeway as a wharf. Early references are to two mills, and the 1865 O S map indicates a small mill building, about 10 m in length, with a wheel at each end. This may have been the early arrangement, i.e. two mills in one building. The N wheel of the building indicated on the map may be, judging by its position, that now serving as the N wheel in the centre of the present building; the wheel carries the date 1801.

The present building consists of two parts, a N wing and the main mill, not quite aligned. The main building is of three storeys, and may date from 1872/4 when, after a vacancy, B G Jones took a new tenancy of the 'dilapidated' mill and a large mortgage.

The mill was used mainly as a corn mill but also briefly as a bone mill in its last years. It ceased production in 1937. It was seen and described by Rex Wailes before it closed down: he described the two undershot wheels of wood and iron with wooden buckets on iron shafts 225 mm square; both 4.8 m diameter, one 1.65 m and the other 2.1 m wide; each drove three pairs of stones on the first floor. Both sets of gearing were on low hursts on the ground floor. He also reported that the mills were semi-tidal.

The mill is the only remaining tidal mill in Wales. It is now managed by the National Park and was opened to the public in 1985 after restoration.

The name 'French mill' is thought by some to be simply because of the use of imported French millstones, but there is a tradition, reported by Wailes, that the original mills were built by French millwrights.

Three storeys plus attic, built of local limestone, rendered, with a slate roof. Range of five windows in each of the main elevations, facing E and W, and a range of two windows in the gable ends. The attic is lighted by single windows in the gables. Small windows with cambered brick arches and 16-pane tilting casements, all restored. External steps lead down to the basement level at the S end. Several remedial tie rods stretch across the mill and are anchored into external tie plates. The building is now entered through the N extension wing.
The Tidal Barrier lies across the estuary of the Carew River about 300 m W of Carew Castle. A stone faced causway with a clay core about 150 m long with central floodgates and spillway at the N end. When functioning the barrier impounded a pool of over 9 hectares and there was an available head of water of 3.3 m.

The top floor is the bin-floor; beneath it is the stone-floor; and the ground level is the meal-floor. The machinery has been restored with the exception of the N wheel. In the N extension is the reception area, with an audio-visual room in its loft.

Listed II* as a well preserved mill and tidal barrier, of great importance to industrial archaeology as the last remaining tidal mill in Wales.