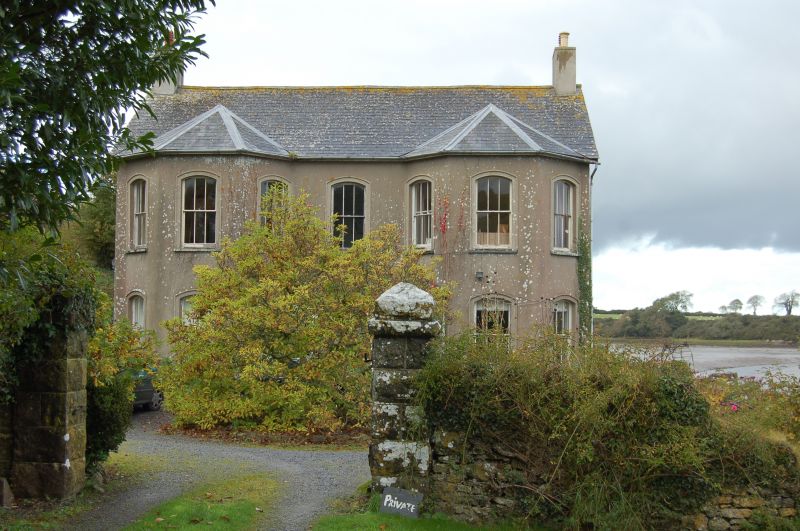 Location: At the S of the French Mill in Carew, reached by the same access lane. The house stands in its own grounds with a garden to the E. Rubble boundary wall with light wrought-iron gates.

The old part of the house is the rear wing. It appears in the Tithe Survey in the occupation of Elizabeth Griffiths, who was the miller at the French Mill. The house was greatly enlarged later, possibly in the time of B G Jones, who took a tenancy in 1872. An E-facing block was added, designed by the architect K W Ladd.

A large double-fronted house of two storeys with and older rear wing. Smooth render at the front and textured render elsewhere. The roof of the main block is of slates with tile ridges and end-chimneys. There is a range of seven windows to the front, one centrally and three in a full-height canted bay on each side. The bays have five-sided hipped roofs with their eaves level with the main eaves. The rear wing has a lower eaves and an end-chimney, plus a lean-to in tandem.
The front windows and the windows of the gable wall have segmental arches and segmentally headed sub-frames. The upper sashes have straight top-rails. Each sash is divided by two vertical glazing bars into three equal panes about 800 mm in height, in hand-made glass. All the sashes are hornless. The front windows have simple external architraves worked in the render and slate sills. Front door with two small windows at its sides. The door has four panels with large bolection mouldings, the upper panels having circular heads. Brass hardware. In the rear wing there are 12-pane sash windows with brick segmental arches.

Listed as a Victorian house developed from the earlier miller's house, in a close-knit group with the rebuilt French Mill and significant as part of the same scheme of investment and improvement which brought about the rebuilding of the mill.