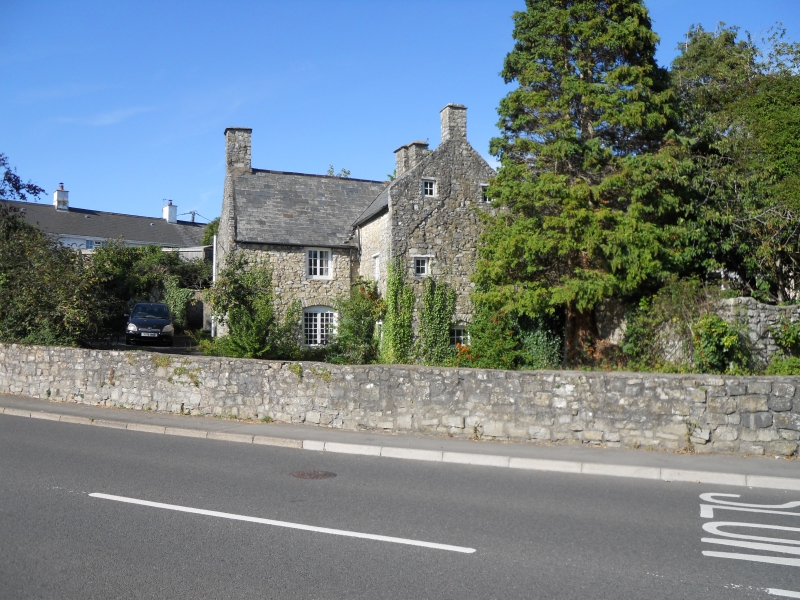 Location: About 130m north of Boverton Place on the road to Llantwit Major.

Late C16 to C17. This is a three-unit lobby-entry house with hall between heated outer room and small inner room. However, 'An inventory of the property the owner, Rees Portrey, in 1651, indicates that the house at the time of his death consisted of a hall and parlour with a chamber over. The 'R.P.' of 1658 (inscribed on the central beam of the hall) is therefore his son who appears to have enlarged and refurbished the house.' (RCAHMW) This would account for the obvious heightening of the south-east wing.

Local limestone rubble walls, Welsh slate gabled roof with stone coping; a double flued stone stack near centre; a flanking stone stack to left hand gable and an external chimney breast with stack to right hand gable. T-shaped house of two storeys with attic storey and with projecting gabled wing with gable stack in south-east elevation; this wing has had the attic storey added at a later date.
Main front or south-east elevation with casement windows with small panes, mostly renewed. From south-west end, a 6 6 pane casement window above and a late C20 18 18 pane one under a relieving arch below. South-east gable end of projecting wing with a small ground floor 3 x 2 pane window with segmental relieving arch over, and a small rectangular window opening with 2 x 2 panes on either side of the ghost of the previous gable on first and attic floors. To right hand of projecting wing, a three window wide front, the middle and right hand ground floor windows with segmental relieving arches over, all small pane casements. Entrance in angle between right hand and projecting wing. Steeply pitched roofs.
Rear elevation with continuous lean-to and gabled storeyed projection for the stair near centre.

Only the ground floor was seen at resurvey which confirmed the features seen at listing in 1973. North-east ground floor room with original fireplace and double ceiling with ovolo moulded beams, one inscribed 'RP 1658'; middle window in this room thought to retain remains of ovolo moulded oak frame. Projecting wing said to retain corbelled fireplace and an original wooden boarded door on first floor. Original fireplace with massive stone jambs and lintel to south-west ground floor room with stone stair to right. Some original roof trusses with lapped collar joints are thought to remain. These features are confirmed by RCAHMW where the house is fully illustrated.