A Grade I Listed Building in Llantwit Major, Vale of Glamorgan 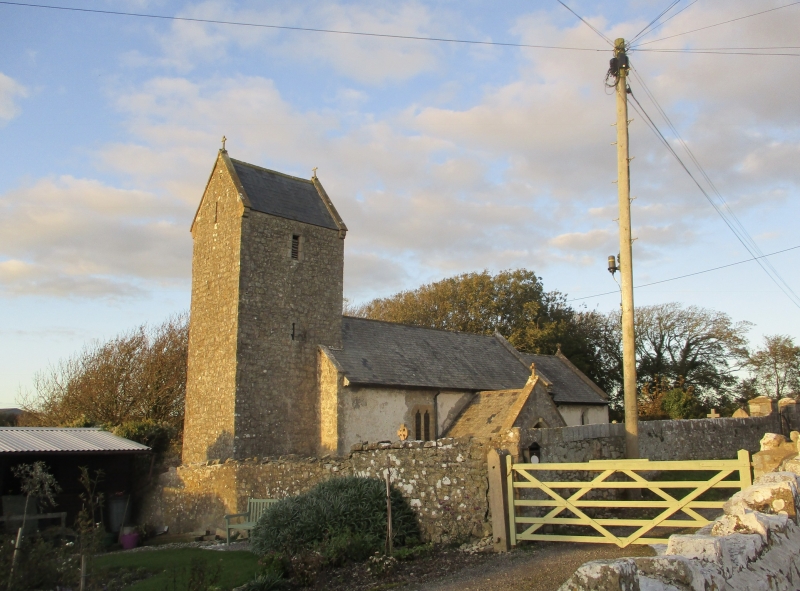 Location: In the centre of Marcross village.

Mid C12 to C14; the tower is likely to have been rebuilt above the ridge in the C17. Church restored 1892-93 to designs of Kempson and Fowler who re-windowed and re-roofed. The church has not been altered since 1893 apart from losing the pews.

Largely rendered local lias limestone rubble walls, but much of the render is breaking away, and has gone altogether from the north nave wall, the 1893 windows are Bath stone, Welsh slate roofs. Nave with west tower and south porch, chancel.
The nave south wall has an 1893 window of two trefoil headed lights each side of gabled porch with pointed arch with dripmould, coped gable with cross, internal benches and internal C18 wall memorials, late C19 or later roof trusses, late C19 encaustic tiles. Round-headed arch at entrance to church of c1150 with billet moulding terminating on grotesque heads and with capitals on quarter columns, plank door of 1893. C18 wall tablet to right of eastern window. North nave wall with slight batter, one 1893 single light window to east and a shorter single light window to west. Coped gables with finial to east gable.
Chancel south wall with two c1300 single trefoil lights, the west one with transom and with shutters below, possibly for sanctus bell (Glamorgan County History, Vol III). One similar window in north chancel wall. East gable window of 1893, three stepped lights with trefoil heads and trefoils above the shorter flanking lights. The chancel has a lower roofline than the nave and has a coped gable with a cross finial.
West tower with saddleback roof and battered walls. South wall with slit opening and single light chamfered rectangular belfry opening, north wall with similar rectangular belfry opening, west wall with square window at base of tower and slit opening in gable, arched opening in gable to east. There are indications of a change in the masonry above the slit windows, see History.
In the churchyard, on the south-east side of the church, there are a number of C18 to mid C19 memorials.

Interior plastered and painted throughout. Nave with 6-bay double windbrace and arched braced collar roof of c1893, chancel roof likewise, but ceiled waggon. Moulded and arched tomb recess of c1300 in north nave wall; font of c1200 with roll mouldings; upper Rood door with 4-centred timber head and brattishing; C12 semi-circular chancel arch with roll moulding breaking into four chevrons in the head and with probably later low stone screen base projecting inwards a short distance each side of arch jambs. Nave floor of wood block and of late C19 encaustic tiles. Pulpit of 1893, the pews have all been replaced by chairs. Grave slab of Sutton stone of c1200, re-discovered in 1893 and set in chancel floor. Semi-circular arch to tower from nave. An C18 and a mid C19 memorial in nave, one each side of south door. Columned stoup in tower.

Included and highly graded as a largely complete early medieval church which has retained its character and has a number of important features.