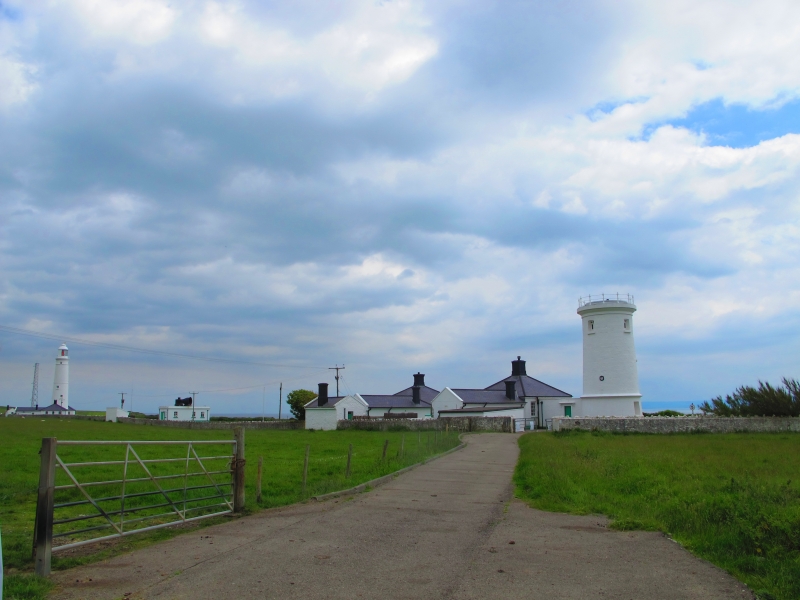 Location: Situated on the cliff-top at Nash Point in a walled enclosure.

An application to display a light at Nash Point was submitted in 1830 by Thomas Prothero of Newport with 439 ship owners and masters from the Bristol Channel. The lighthouses were built as a pair to display two lights (a high light and a low light); Joseph Nelson was the engineer and builder. The purpose apparently was that if both lights were visible the ship was out of the navigation channel and going into danger. Originally there was a single house attached to each tower, but a second house was added c1860. The eastern lighthouse represents the original high light, and continued in use after the closure of the low light in c1924. Its lantern was replaced in 1867, the lens was replaced in 1924 and it was electrified in 1971.

Circular tapering tower 37.2m in height, built of tooled ashlar painted white. Moulded cornice over the ground floor, and plain band over the high second stage. Moulded band and cornice to parapet. Four recessed windows with plain cills aligned on the seaward side, lighting the four upper storeys of the tower. Cast-iron structure to lantern, with lattice-glazing and domed roof with ball finial (ball recorded in 1996, now replaced by windvane). A small corridor links the tower to the symmetrically planned dwellings to either side: each corridor has central entrance with entablature forming canopy over doorway and small flanking windows. Single storeyed dwellings are rendered (lined-out in the later western cottage) with hipped slate roofs, with central stacks with moulded cappings. Two window range facing south, with blind windows on each inner return. Three window outer return elevation to the later western cottage, the original eastern cottage with blind openings in its east elevation. Windows, which are 6 over 6 pane sashes, are largely renewed in original splayed openings. Long rear wings, that to the earlier eastern cottage possibly partly added when the western cottage was built c1860. The buildings are bounded to the rear and to either side by rendered rubble enclosure walls with rough boulder copings, which defined the gardens and allotments of the dwellings. Small buildings built against the eastern length of this wall were probably built as pigsties.

Interior not available at resurvey, but the previously recorded details are unlikely to have been altered. Stone cantilevered stair with cast iron rail winds round the inner face of the tower walls: originally a single room on each of four stages, including the service room below the lantern. Stone slab ceilings to lower stages, cast-iron framework to lantern storey. Cast-iron tube at service room level formerly housed the weights for the clockwork mechanism of the occulting device introduced in 1924 when the lower light was taken out of use. Helical, 'beehive' lens with a reinforced sector light.

Included for its special interest as a part of an ambitiously planned lighthouse complex, and an excellent example of an early C19 tower lighthouse, with its ancillary buildings.