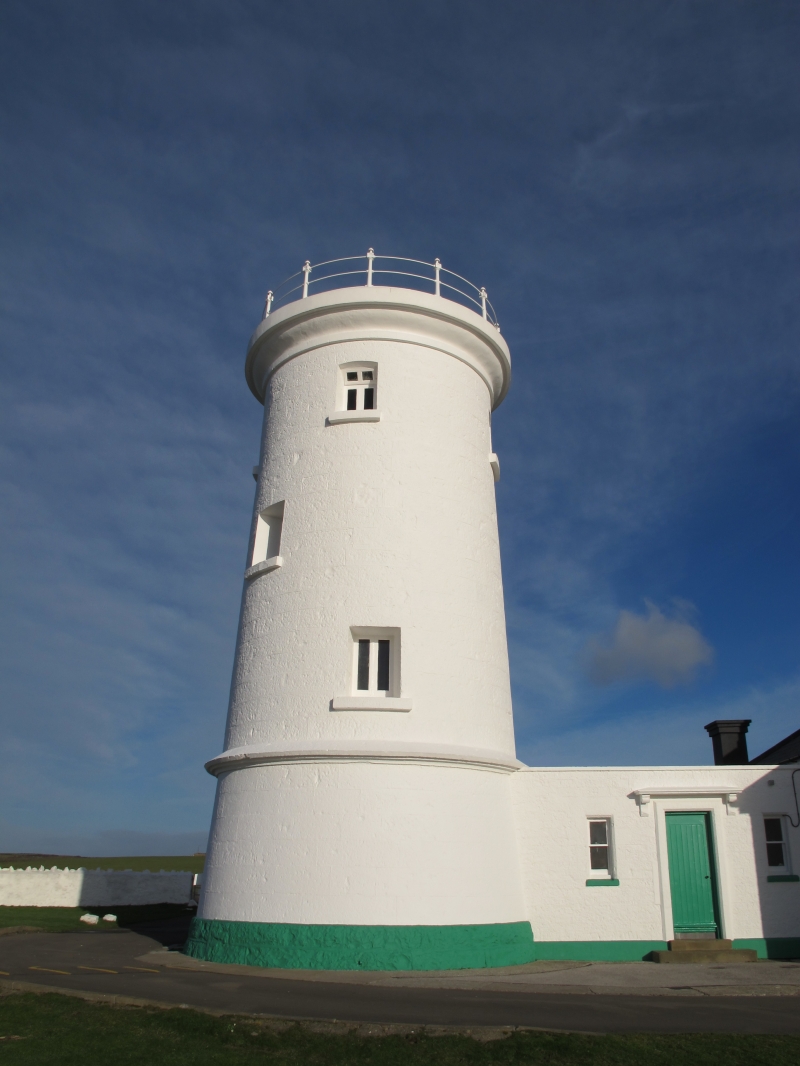 Location: Situated on the cliff-top at Nash Point in a walled enclosure

An application to display a light at Nash Point was submitted in 1830 by Thomas Prothero of Newport with 439 ship owners and masters from the Bristol Channel. The lighthouses were built as a pair to display two lights (a high light and a low light); Joseph Nelson was the engineer and builder. The purpose apparently was that if both lights were visible the ship was out of the navigation channel and going into danger. Originally there was a single house attached to each tower, but a second house at this western tower had been added by 1851. The western lighthouse represents the original low light, which was taken out of use c1924 when improvements to shipboard navigational aids rendered it redundant. Its lantern was later removed.

Tapering circular tower of tooled ashlar 20.42m high, with moulded cornice over the ground floor, and cornice with cast-iron rail at the top. Rectangular splayed window openings on each of the three upper stages; transomed windows of upper storey have top lights splayed back. Low corridor with central doorway with entablature hood and flanking windows links the tower to the original keeper's cottage. This is painted rusticated stonework, hipped slate roof with central chimney with moulded cap. Two window range facing south (the 6 over 6 pane sash windows are renewed in original openings). Blind windows in return elevation to east; long rear wing. A short length of garden wall links this cottage with the rather later second dwelling: lined-out render (over rubble) rather than ashlar, with symmetrical south facing elevation with central doorway beneath entablature hood, and flanking 6 over 6 pane sash windows. Similar detail in off-set rear wing. The dwellings are enclosed to the rear and to the east by rendered rubble walls with rough boulder copings, and against this wall to the north, between the two cottages, is a wash-house of c1860.

Interior not available at resurvey, but the previously recorded details are unlikely to have been altered. Cantilevered stone staircase with cast-iron rail winds against the inner face of the wall. Stone slab ceilings to lower floors, cast-iron framework to lantern storey. The lighthouse includes a cellar which was once used as an oil store.

Included for its special interest as a part of an ambitiously planned lighthouse complex.