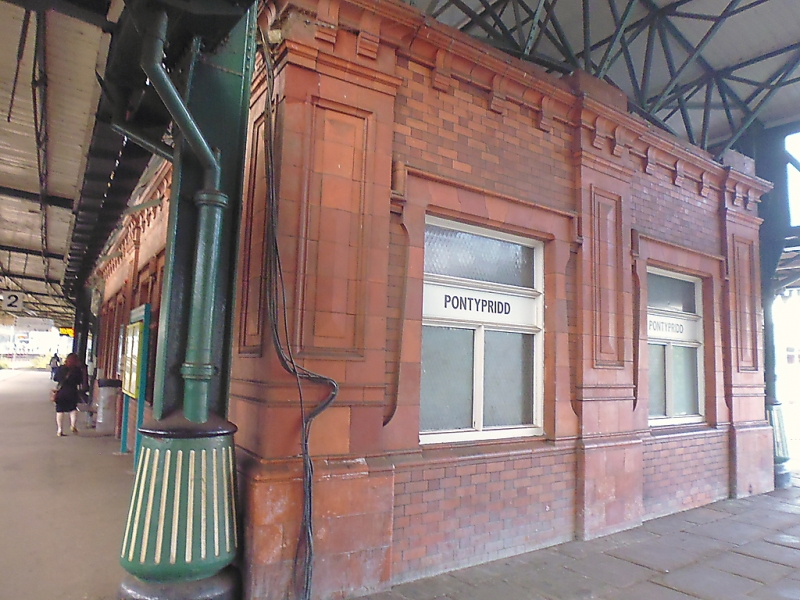 Location: At the S end of the town, entered from the S end of Sardis Road. A high-level station, it is built partly over the S section of High Street.

The Taff Vale Railway was the first major locomotive railway in Wales. It was incorporated in 1836, built 1837-40 and opened in 1840-1 from Merthyr Tydfil to Cardiff, primarily to serve the ironworks of Merthyr Tydfil. The chief engineer was Isambard Kingdom Brunel. Pontypridd developed into a major network as the focal point for transporting coal from Merthyr and the Cynon and Rhondda Valleys to Cardiff. It also enjoyed increased passenger traffic, and in 1907 reconstruction of the station was begun. At its peak it dealt with 11,000 passengers a day and had 7 platforms. The main, island, platform that remains in use was said to have been the longest in the world when built and is still the longest in the Western Region. Remodelled in 1970s.

A long, distinctly curved platform, the majority of which is roofed. The roof is 14 bays long, 8 of which have broad projecting canopies. The roof is carried on I-section steel piers (by the Lanarkshire Steel Company) which stand on fluted oval cast iron bases. The lightly trussed steel roof has segmental principals and a boarded underside. The canopies have deep ogee valencing. Beneath the roof are 6 buildings including ticket offices, station master's office, waiting rooms and toilets. These are in a free Egyptian revival style, of red brick with terracotta. All have parapets, deep bracket cornices, panelled pilasters and high plinths. The openings have labels over lugged and tapered architraves. Mainly fielded panel doors and T-framed windows. A 2x2 bay toilet block with long side bays is at the S end. To its N is the largest of the buildings, incorporating the ticket office, which has a 9-bay platform elevation and 2-bay end elevations, the N end having a square panel with an urn sprouting foliage. The next building N is the station master's office, which has a 6-bay E wall and single-bay end walls, on the S side of each bay being opposed flights of stairs (both now closed) descending to ground level beneath the platform. Both have tall panelled gate piers, the W side with Baroque style overthrow and sliding lattice gates. Side railings with simple Art Nouveau detail are by Bayliss Ltd of Wolverhampton. Another stair, now the main stair, is further N, which has similar piers and overthrow with addition lettering reading 'Way Out'. The lower level is faced in white-glazed tiles. Beyond the N stair is a lift and 3 further buildings.

Several benches are retained which have cast iron uprights, including 2 styles of GWR benches and others with 'BR(W)' (British Rail Western Region).

The main waiting room has pediments to ends and turned balusters to roof trusses.

Listed for architectural interest as a fine Edwardian railway station retaining original character, and for group value with other listed railway items in the centre of Pontypridd.