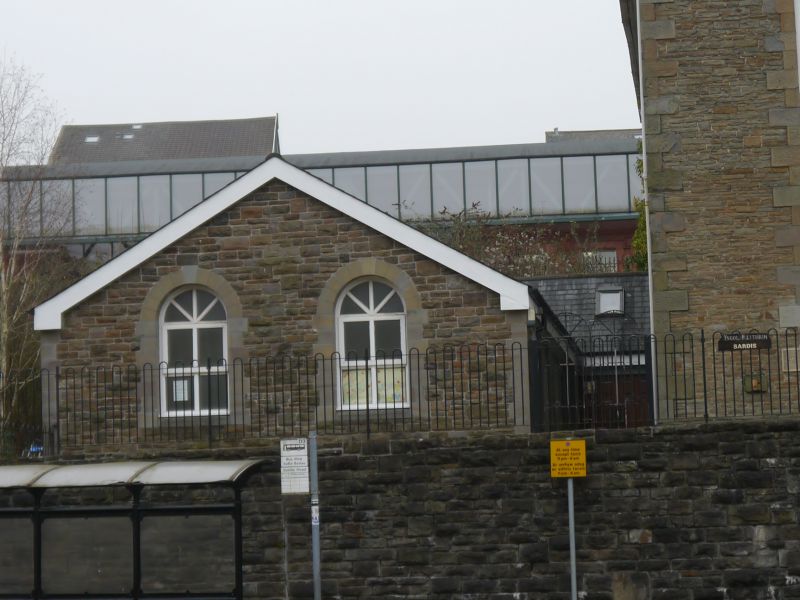 Location: Set back from, and above the road immediately below the N end of the railway station. It is reached up steps in the forecourt wall facing the road.

A Welsh Independent chapel, of which the present building was constructed in 1852, replacing an earlier and smaller chapel of 1834 (dates on building) that is shown on the 1846 Tithe map. The interior was refitted probably in the early 1900s, at the same time as the Italianate tracery was added to the windows.

A simple classical style chapel of rubble stone and with tooled dressings and quoins showing that the walls were intended for rendering. A slate roof has a central ridge ventilator. The 3-bay gable end front has a central round-headed doorway with panelled reveals and double panelled doors with radial-glazed overlight. Above is a bullseye window, while the outer bays have tall round-headed windows with Italianate 2-light glazing. A simple cornice band defines a pediment, with a simple inscription tablet (in English).

The 4-window side walls have tall windows similar to the front. On the L side the sill of the window at the rear is raised to accommodate a link between the chapel and an added L-shaped hall of snecked rock-faced stone with slate roof.

The decorative-tile vestibule has an etched glass panel with margin lights opposite the main doorway. Half-lit doors with coloured glass lead to the main chapel, while stairs with turned newels and balusters lead to the gallery through diagonal-boarded doors. The 3-sided raked gallery has cast iron fluted columns and foliage capitals. The front projects on brackets and has open quatrefoil panels above diagonal-boarded panels. The ceiling has moulded ribs and a panelled cornice with billet frieze. A round panelled pulpit has flanking steps with moulded balusters and newels. Behind it is a large organ by Norman & Beard. The set fawr has doors. Benches have moulded ends, the rear pews taller.

Listed for the architectural interest of its mid C19 exterior and the fine early C20 interior.