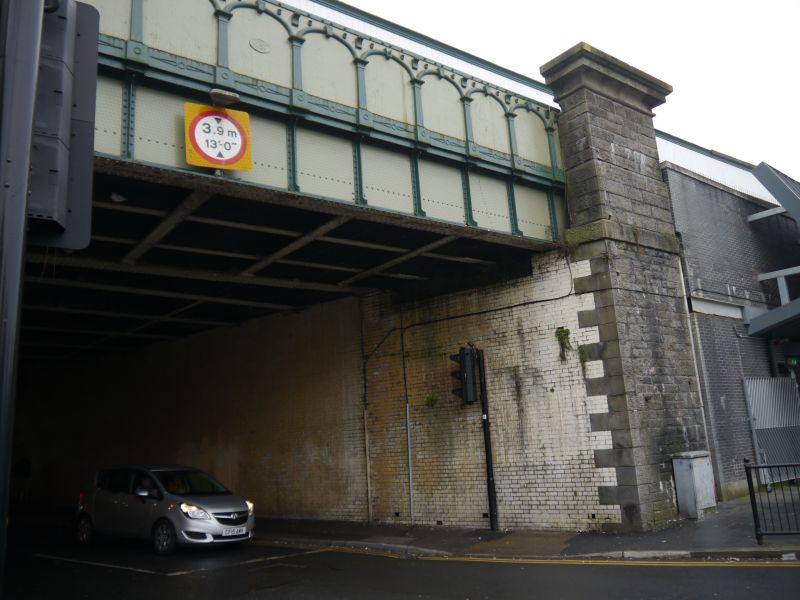 Location: Directly below the railway station platforms and carrying the railway over High Street.

The Taff Vale Railway was the first major locomotive railway in Wales. It was incorporated in 1836, built 1837-40 and opened in 1840-1 from Merthyr Tydfil to Cardiff, primarily to serve the ironworks of Merthyr Tydfil. The chief engineer was Isambard Kingdom Brunel. As branch lines were built to the Cynon and Rhondda valleys later in the C19 mineral traffic, largely coal, increased dramatically, making Pontypridd an important focal point of the S Wales railway network. The bridge was rebuilt in 1899 by R Finch and Co Ltd, Engineers and Iron Founders of Chepstow.

A steel girder bridge with distinctive parapets on both sides, which have fluted pilasters and blind elliptical arches with ornamental aprons. A foundry plate is in the centre. The bridge is flanked by 2 tall and broad rock-faced stone end piers with deep freestone cornices. Beneath the bridge the side walls are of white-glazed brick. A change in the cross members beneath the deck on the E side probably indicates the line of the earlier bridge.

Listed as a good example of a plate girder bridge in a prominent location, and for group value with other listed railway items in the centre of Pontypridd.