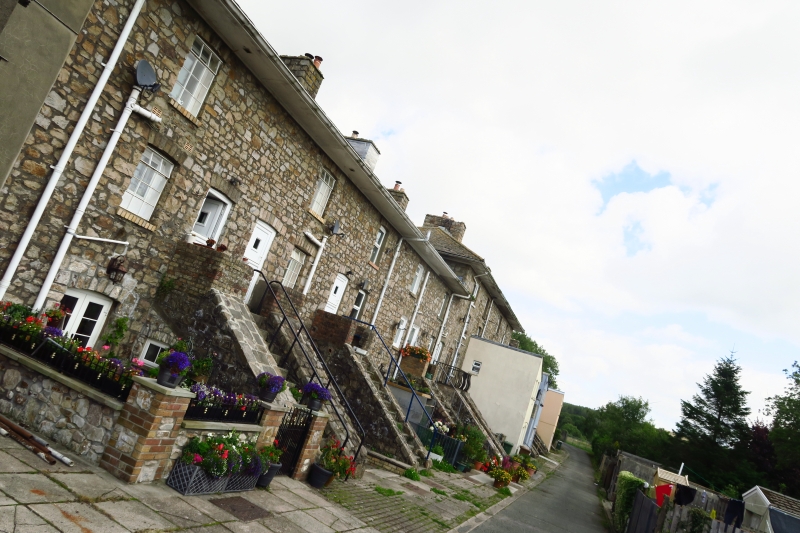 Location: Bute Town is situated SW of Rhymney Bridge, W of Llechryd and off the A 469, reached by a short drive; Lower Row is the southernmost of the 3 terraces.

Union Ironworks were established on the other (E) side of the Rhymney River c1800-02, soon becoming the property of the Crawshay Ironmasters, managed by Richard Johnson. In 1825 a new ironworks was begun on the opposite bank on land owned by the Marquis of Bute, with their notable Egyptian furnaces 'adapted from the most striking part of the ruins of Dandyra in Upper Egypt', built by McCulloch; in 1828 an exhibition of drawings and engravings of the structures was displayed at the Royal Academy. These terraces were built nearby to house the ironworkers. Constructed to a high standard, the plan was probably based on James Adams' planned village at Lowther in Cumbria of 1765. Originally conceived as a larger model village; the foundations of a fourth row were laid to S but the exhaustion of the ironworkings did not justify its development. On Rhymney Ironworks Company map dated 1838, the year after the company was formed though the map was later, the settlement is called New Town; it later became known as Bute Town. Pond to provide water to drive the blast water wheel is shown to W; this is still in existence though reshaped. OS map of 1873-5 shows the Rhymney Branch of the London and NW Railway passing to W. Since listing in 1973 and a renovation programme in 1979 the terraces have gradually recovered a more homogeneous appearance eg removal of pebbledash cladding from some exteriors and standardisation of windows into 2-pane horned sashes and doors now all boarded with a glazed panel. This applies only to frontages; to rear and sides windows have not been standardised. The original windows are however likely to have been similar to the small pane iron framed windows in the Museum and the masonry to have been rendered.

The cellar dwellings incorporated into the lower storey of this terrace were for the very poor and were later condemned as unhealthy.

The street numbering in Lower Row follows on consecutively from the numbering in Middle Row. Terrace of 2 and 3-storey early C19 ironworkers’ houses. Plan of outer bays and central 3-storey bay all projecting with recessed bays between. Thus from NE (left): Nos.14 and 15, centre bay Nos.20,21,21a and 22, end right bay Nos.27 and 28 all project, matching the terrace of houses in Middle Row on the opposite side of the street. Lean-tos at each end of terrace. Each house except the central range has a single window range and door; the central houses are in pairs, each pair share a 3-window range (centre windows blocked in each case) with outer doorways. Across all 3 terraces the plan is very nearly but not quite symmetrical. Built of roughly coursed stone rubble with shallow pitched hipped roofs of stone slates, separate hipped roof to the central range, chunky ridge stacks, mostly shared. Windows are horned sashes without glazing bars (except for museum at Nos.26 and 27), yellow brick sills. Boarded doors, mostly recessed, have a glazed panel. Openings have slightly cambered heads, some with iron lintels showing, with rough voussoirs and surrounds.

To rear, unlike the other terraces, Lower Row incorporates an extra lower storey accessed from a rear doorway at ground level, creating what was originally a separate cellar dwelling. The main houses are entered from higher doorways reached via a steep flight of shared steps of stone and brick incorporating a store beneath. Many later extensions.

Original interior plan of two rooms on each floor, double depths, each with a fireplace and spiral staircase beside.

Listed, notwithstanding external changes of character, as amongst the earliest planned industrial housing in the Welsh Valleys. Group value with other listed buildings at Bute Town.