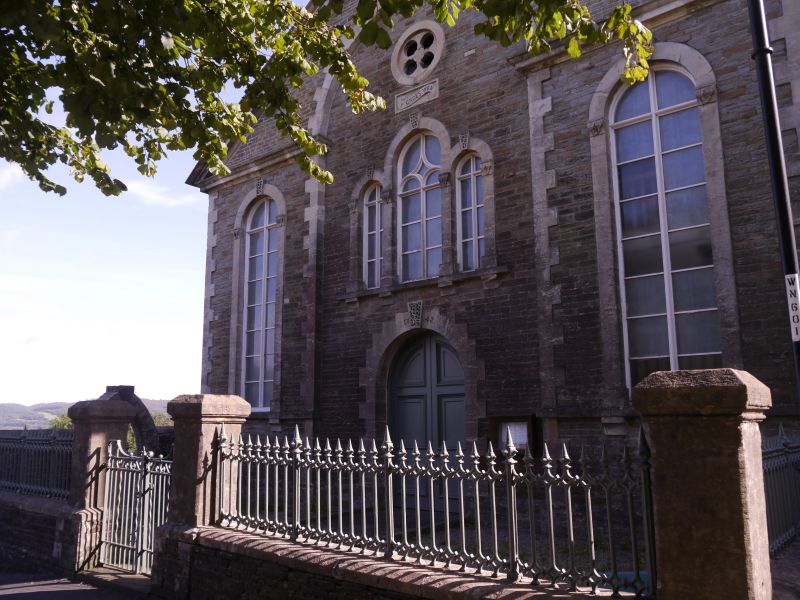 Location: Set within its burial ground, the chapel faces the road with vestry adjoining to the W. Located at the E end of Groeswen village.

Groeswen was built in 1742, the first meeting place in Wales of the Calvinistic Methodists. The Methodist revival in Eglwysilan followed the visit of Hywel Harris of Trevecca in the 1730s, who came at the invitation of the Rev. David Williams of Pwllypant, and later, Watford Chapel. Following doctrinal disputes, the Calvinistic Methodists, under Harris, split from the Rev. David Williams and the Independents. The first society house at Groeswen was built by volunteers under the direction of William Edwards (1719-1789), the bridge builder and first joint minister of the chapel, who was an early convert to Methodism. It was designed for the 'public worship of God, or a school for the education of children'.

Although the influence of Hywel Harris soon declined, the society grew rapidly and the chapel was either enlarged or rebuilt in 1766. William Edwards was buried at St. Ilan's Church because there was no graveyard at Groeswen. This was rectified in the period 1798-1801: The earliest inscription in the burial ground is to Elizabeth Morgan who died in October 1801. The chapel was enlarged in 1830-1 so that it could accommodate 600 people, whilst the burial ground was extended to the E in 1865. Known as the 'Westminster of Wales', the burial ground contains a range of displayful monuments, many of which are to ministers and benefactors of the chapel.

The present chapel dates to c1874, when it was decided that a complete renovation was required at an estimated cost of £1,025. This was undertaken by the Rev. William Nicholson, with some church fittings provided by the Thomas family of Aber Fawr.

The vestry is probably C18. It is shown on the tithe map of 1841, and was a British School in 1866, established by the charismatic minister, William Williams ('Caledfryn'). It was converted to a vestry in 1878.

The chapel and adjoining vestry are within a railed forecourt, with large burial ground to rear, with a fine collection of C19 and C20 monuments.

Entrance vestibule with stairs to L and R leading to gallery. Boarded doors lead into chapel, between which is a square window with wooden diamond glazing bars and coloured margin glazing. Three-sided gallery on narrow cast iron columns with foliate capitals. Panelled and decorated gallery front, with clock in centre, reading Barry/Cardiff. Polygonal pulpit, behind which is a round-headed archway in moulded and decorated plaster. Inside the arch is a bronze plaque bearing a portrait in relief of William Edwards. Underneath the portrait, it reads 'To the memory of Rev. William Edwards, the self-taught engineer and builder of the world famed bridge over the River Taff at Pontypridd ... He was the first minister of the church, which he faithfully and earnestly served for 40 years'. The work is by Goscombe John and is dated 1906. Windows with red and blue stained glass flank the arch. Boarded surround to ceiling and ornate plaster ceiling rose. Three banks of box pews with circular heads to pew ends. Three tiers of pews to gallery.

The upper storey of the vestry has a planked door and wainscot panelling. Late C20 fireplace to W end.

Listed grade II* for its national historic interest as being the first Calvinistic Methodist Chapel in Wales. A number of charismatic leaders were associated with the chapel and some are buried in the graveyard. The memorial to William Edwards, sited prominently inside the chapel, is of additional special interest.
Group value with monuments in burial ground.