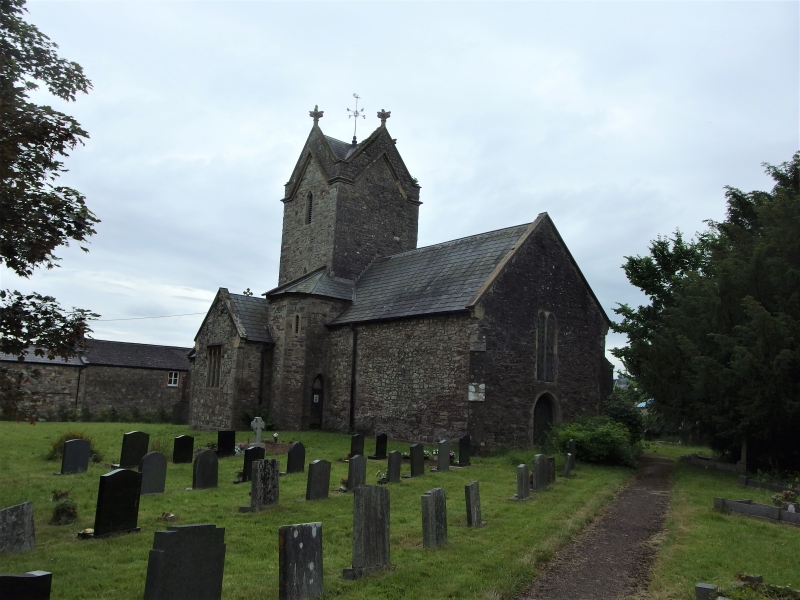 Location: A little to the E of the hamlet of St Georges which developed round Castle Farm, main approach from N, the centre of a small cluster of buildings grouped round the churchyard, close to the Ely River.

Reputedly with an Early Christian foundation. One of the smaller cruciform churches of Wales. Earliest masonry appears to be N wall of random rubble, the rest an enlargement of late C14. Tower and N transept rebuilt 1838 by John Montgomery Traherne of Coedrhyglan/Coedarhydyglyn, commemorated on a plaque inside the church, the four-gabled tower top with finials a C19 introduction. Adjacent first school backing onto churchyard was founded in early C19 for children of farm-workers and tenants by the Traherne family. Nearby former Rectory at Drope erected later C19 for Rector and Chancellor of the Diocese of Llandaff, George Traherne.

Interior is known to be rendered and whitewashed, with plain steeply pointed crossing arches and thin ribbed plaster vault dating from C19 reconstruction. Medieval wagon roof with square bosses to nave; medieval arch-braced roof to S transept. Two tomb recesses in chancel: one with segmental arch with 2 rolls and hood with headstops wearing chain mail helmets, C14; the other larger with cusping and hoodmould, a little later in date. Octagonal font of C15. C18 and C19 wall monuments, including one commemorating the rebuilding of the church by John Montgomery Traherne. Traherne family pew in S transept. Chamber organ late C19 from Coedarhydyglyn. Coats of Arms of earlier Lords of the Manor, including Le Fleming, owner of the Castle of St Georges.