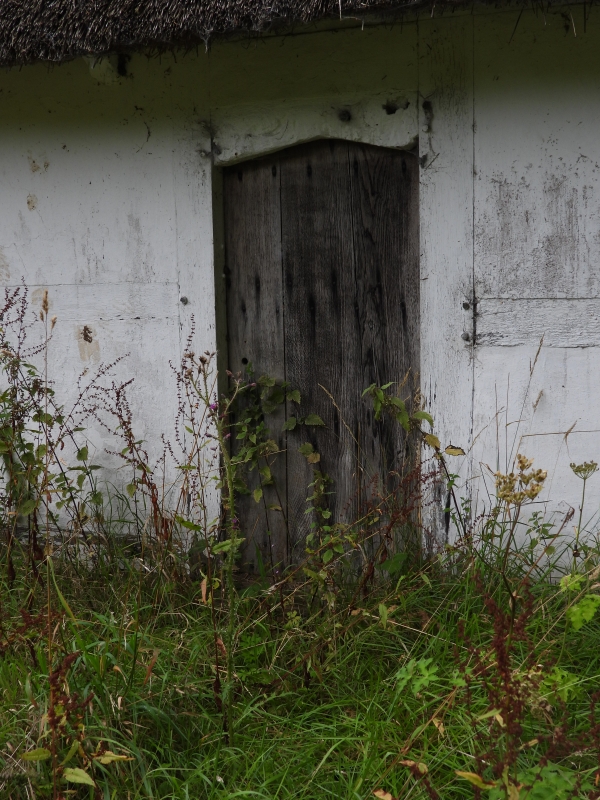 Brought from Llangynhafal, Denbighshire. Late medieval, said to have been built in 1508. Before renovation and reconstruction an extra room had been added to the house at a later date, a chimney and later windows inserted and a corrugated roof added to cover the thatch, while the thatch had been removed from the outbuilding. The building, as re-erected, has been made to resemble as closely as possible its original form, in which it had four cruck trusses, with the three-roomed house completely partitioned off from the two-unit outbuilding by an internal timber-framed wall. It was re-erected at the Museum in 1962.

Timber-framed single storey house and outbuilding with common roofline of wheat straw thatch. Timber framed walling over a five bay cruck structure, the walling panelled with wattle-and-daub and the whole limewashed.
North-east elevation of house with doorway with shaped head and two mullioned windows to north, 4-light and 5-light. The outbuilding divided into two by a cruck-truss, and in present north-east elevation, with a separate doorway to each room, with a low doorway nearest the house; two window openings in south-west wall. Outer walls of both house and outbuilding with partly renewed timber-framing; wood mullioned windows with renewed mullions; some shaped door heads. The rear wall has a 4-light window to the housepart and two shuttered openings to the hayloft at the lower end.

Earth floors re-instituted in house according to description of donor. Some shaped door heads; renewed thatched roof of wheaten straw with underthatch of oak rods on riven oak stakes.