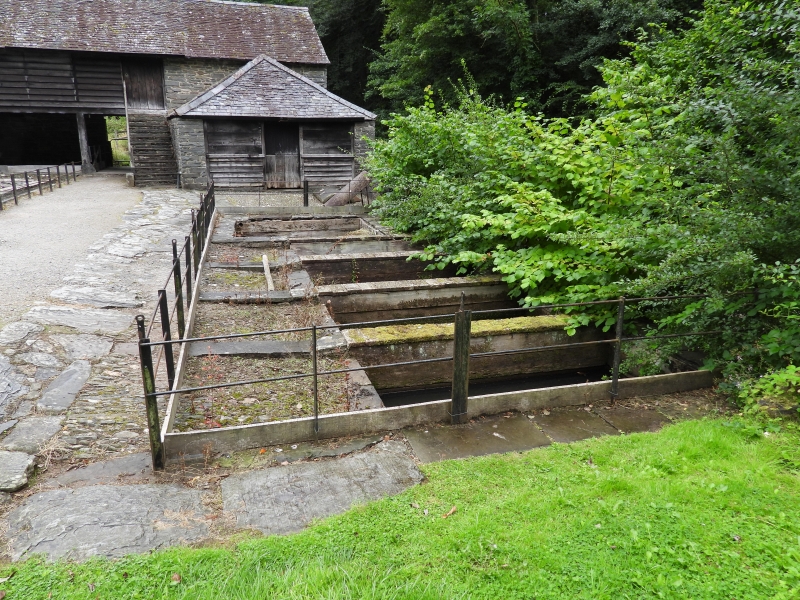 Brought from Rhaeadr, Radnorshire and the gift of a family who had been concerned for generations with the leather trade in mid-Wales. Probably late C18, with C19 alterations, operating continuously until the 1950s and the last oak-bark tannery in Wales to do so. It was re-erected at the Museum in 1968. The chief products of the tannery were heavy leathers for boots and horse harness. The complete tanning process as undertaken in the mill took eighteen months.

Walls of rubble stone and louvred weather boarding, Welsh slate roofs. Roughly L-shaped with a further cross-wing on north-west - south-east axis at south-west end. This cross-wing contains a bark store and bark mill, the latter operated by water power; northern elevation of north wing of stone. The western portion of the northern wing has all its walls of stone and, on the lower floor, there are the office, weighing room and cellar with part of the drying section above on the first floor. One storey and loft to whole.
Almost all the features of the building face into the yard. South-west elevation to yard with three small 2-light openings with heads at eaves level and below, a door and window with single segmental headed arch, a segmental headed doorway with half-door and cambered headed window to damp cellar (for horse hides). South-west elevation of eastern part with first floor wall of louvred weatherboarding supported on timber posts; on first floor, part of drying section. Intermediate wing on north-south axis; northern five bays with first floor wall again of louvred weatherboarding supported on wooden posts; drying and currying section on first floor; twenty-two handler or floater pits for second process of tanning on ground floor. Removable ladder to first floor doorway at northern end; doorway at southern end with stone stair before it, the latter built against the northern wall of the single-storey beam house used for unhairing and fleshing and which has a hipped roof and stone walls, the west wall weatherboarded and with wide shuttered window and door openings.
Eight leaching pits for production of tanning liquor and eight suspender pits for tanning in middle of yard. Three lime pits, one offal pit, and one water pit on south side of yard to west of beam-house.
The outer facing walls of the whole structure are plain stone with minimal features, a taking-in door in the north-west gable, ventilation slits on the south-west wall of the grinding mill and the overshot waterwheel for the mill on the south-east gable.

Eight bay queen strut roof in the main range over the drying and currying section.