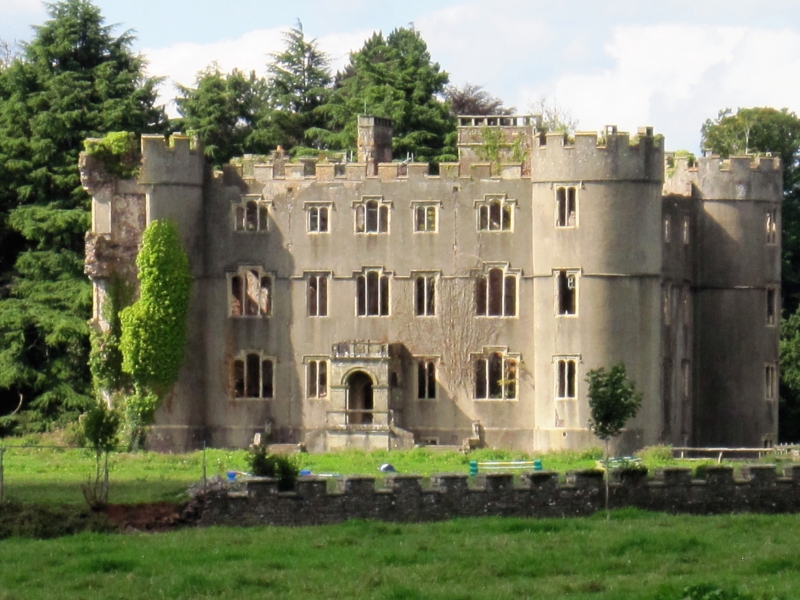 Location: Approximately 2.5km E of Rudry Church, on high ground above Rhymney valley and reached by private drive W of minor road between Michaelston-y-Fedw and Draethen.

Built c1626 by Sir Thomas Morgan, steward to the Earl of Pembroke, and the latest example of the Elizabethan and Jacobean court taste for castellated mansions. Its square plan with towers at the angles was broadly similar to Wollaton Hall in Nottinghamshire (c1580) and Lulworth Castle in Dorset (c1608). Charles I stayed there in 1645 after the Battle of Naseby, when the house was described as one of the few houses fit for a king. Brick was used extensively in the original building, one of the earliest such uses in Glamorgan.

In the early C18 Ruperra was sold to the Morgan family of Machen and Tredegar. From 1782 the main residence was Tredegar House, Ruperra Castle being occupied by the heir to the estate. Ruperra Castle was badly damaged by fire in 1785, after which it was remodelled by Thomas Hardwick, when gablets in the S and E elevations were replaced by embattled parapets. The house remained occupied until the early C20. Additions made after 1909 by Commander Courtenay Morgan included porches to the E and W elevations, but by the 1920s the house was used only occasionally. In 1941 troops were billeted there after Dunkirk and the house was gutted by fire in December of the that year, since when it has stood abandoned.

A ruined large 3-storey house, roughly square in plan, with 5-bay elevations between round towers at the angles. The walls are roughcast with brick and stone behind, and have embattled parapets. The entrance front is on the S side and has 3-light stepped mullioned windows (decreasing in height in the upper storeys) with hood moulds (forming a continuous string course in the middle storey) and a central 2-storey porch in ashlar. The porch is richly detailed in Bath stone, although the relief work is now eroded. The main doorway is round-headed and flanked by shell-headed niches, and surmounted by shallow strapwork, friezes and cornice. The cornice is carried up to form broken pediments to the L and R over heraldic achievements (the arms of the Earls of Pembroke to the L and the Morgans to the R), beyond which are damaged putti on corbels. Centrally-placed above the cornice is an aedicule with Ionic columns, a broken pediment and acroteria, and a Royal Arms (probably Charles I). In the upper storey is a stepped mullioned window similar to the main wall, and an open balustrade.

The towers have 2-light mullioned windows with hood moulds continuing as string courses. The SE tower partly collapsed in 1982. The E and W elevations have similar stepped mullioned windows to the S wall except that there are 2 bays of smaller 2-light windows between the central and outer bays. The E elevation has a porch added c1909. The W elevation has a porch also added c1909 and now overgrown, and windows on 4 storeys, as does the N elevation, which has a central bay of 3-light windows flanked by bays 2 bays of 2-light windows and a basement doorway on its E side.

Not inspected at time of survey. Said by RCAHM Wales to retain few early features. The hall was situated on the first floor E of the porch, and 2 dressed stone doorways survive at this level and were part of the screens passage. In the lower storey. A kitchen on the N side has a fireplace with moulded jambs and segmental head, and 2 doorways with similar mouldings lead to an inner kitchen and pantry.

Listed Grade II*, Ruperra Castle is one of the most important Renaissance houses in South Wales.
Scheduled Ancient Monument Gm379.