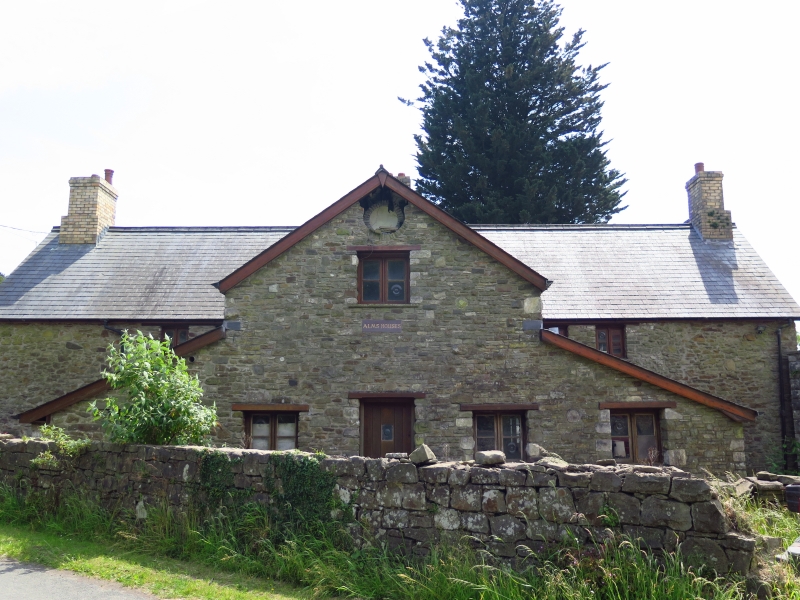 Location: Located on the S side of the lane which leads off the A48 to St Mary's Abbey Church. The almshouses are opposite the churchyard entrance.

Probably C15-16 in origin and part of Margam Abbey, possibly an infirmary or home for elderly lay brothers. Originally 4 units, each consisting of 1 room with its own entrance. The upper storey was probably a dormitory and is said to have been entered from a building to the W.

After the dissolution of the monasteries, the range was converted to almshouses and is mentioned as such in 1716. Possibly at this time, the fireplaces were inserted, resulting in a lobby entry arrangement for each unit. Stone fireplace stairs were added to the rear of the 2nd and 4th units from the L, suggesting a possible 2-unit, 2-storey arrangement. The building housed 8 destitute women in 1840 just before Margam village was cleared away by C R M Talbot to make way for his kitchen garden. A painting of the same year shows an upper storey doorway to the W of the current range, reached by stone stairs. The almshouses were retained, just outside the boundary wall of the park, and were converted into cottages for gardeners on the estate. Additional upper storey windows were probably added at this time.

The front faces S towards the lane which led to the abbey, before it was replaced by kitchen gardens c1840. The entrance is now on the N side where the new road leads down to the abbey. Long 2-storey range of rubble stone under renewed slate-covered roof. Yellow brick ridge stacks to ends and centre. The S front has 4 narrow dressed stone doorways with 2-centred arched heads and continuous chamfered mouldings. Two are located towards the ends with planked doors and 2 are towards the centre, now with glazing. Between the central and outer doorways are pairs of 2-light casement windows under continuous stone lintels. Eight 2-light casement windows to upper storey with stone sills and timber lintels. Two skylights to roof. No openings to gable ends, though evidence for alterations to E.

Late C20 gabled wing with flanking lean-tos added to centre of N side in matching materials. Central front door under flat lintel flanked by 2-light casement windows, with matching windows to fronts of lean tos. Further window in gable, with roundel in gable apex. High level openings to sides and glazed door to R lean-to. Pairs of windows in the upper storey of the main range flank the added wing.

Lobby entry arrangement for each of the 4 units. The 2 central doorways face back-to-back fireplaces with fireplaces to the ends. Stone fireplaces with splayed jambs and chamfered timber lintels with hollow filleted stops. Stone fireplace stairs to rear of 2nd and 4th units from L, the latter with late C20 timber treads. Bakeovens to 1st and 3rd units from L, in jambs of fireplaces, and with stone voussoired heads. Next to the former is a long recess. Chamfered ceiling joists, some replaced. Partition between 1st and 2nd units removed, whilst a new partition between 3rd and 4th units must replace an earlier division in this location. A feature of the building is the small square recesses in the walls, presumably for storage. There are 2 or 3 for each unit. New doorway in 2nd unit leads N to late C20 extension which is for a kitchen.

The upper storey is partly in the roof. The roof structure is late C20 and is pegged to match character of original. West end stone fireplace with recess in one of the jambs. Small square recesses in walls, as below. Splayed openings to windows and stone sills. The upper storey is otherwise modernised.

Listed as a rare survival of almshouses dating back to the early C18 and with medieval origins.