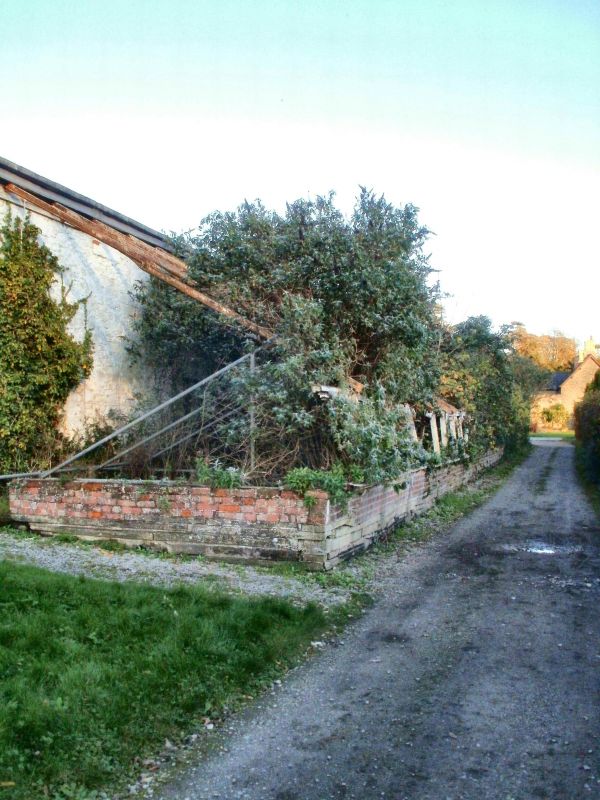 Location: The kitchen garden wall forms the N boundary of the gardens and flanks the lane leading to the abbey. A wall at right angles runs S to the Vinery Glasshouse.

By 1842 the boundary wall of Margam Park had been extended to enclose new kitchen gardens. This was undertaken by Christopher Rice Mansel Talbot and involved clearing away most of the village of Margam. The new village of Groes was built in its place by Edward Haycock. A pair of small wooden gates at the S end of the walls (with Grove Cottages to the rear) are on the site of the original road which led to the abbey. The kitchen garden boundary wall is joined by a wall at right angles which leads to a vinery glasshouse of c1890. Both the vinery and the E end of the kitchen garden wall incorporate sections of former farm buildings which stood in Margam village. The vinery glasshouse was one of several at the park by Messenger & Co of Loughborough, but is the only one to survive. It was said to be one on the best vineries in Britain and wine was made for visitors to the castle. Although it has lost its glazing (it was damaged by storms in 1997), its vines are over 60 years old and still produce grapes for wine.

High rubble stone wall with flat dressed stone coping. The wall is faced in red brick to much of the interior S-facing side to encourage heat retention for the growth of climbing plants. From the E end, a short C20 linking wall is attached to the almshouses and runs at an angle with some red brick below the coping. The wall then turns towards the W in the same style before joining another section slightly set forward. This has quoins to the angle, a ventilation slit and small recesses, suggesting that it was formerly part of a farm building. After a short distance the wall changes angle slightly towards the NW and from here it is faced in red brick. It continues for some distance to the rear of the vinery and a maze. At the NW angle of the maze the wall returns to the S. At the SW angle of the maze the red brick facing finishes. It continues S and is broken by a pair of low double gates between plain square piers. The wall dog-legs and continues as far as Park House at a lower level.

A wall runs at right angles from the brick-faced wall towards the S where it joins the W end of the vinery glasshouse. This wall is of narrow rubble with a flat stone coping and has a doorway at the N end with a segmental stone head. Towards the S end is another doorway with a 4-centred arched stone head and dressed, chamfered jambs. Both doorways are boarded over. The wall returns to the E as the rear wall of the vinery. Quoins to the angle, ventilation slits and blocked openings suggest that this wall was formerly part of a farm building. It has a flat stone coping.

The long vinery glasshouse consists of a low brick plinth with a short upright section of open timber panels. Although the glazing is missing, the internal ironwork for opening the windows is still extant. The building has a pitched lean-to roof with vertical iron struts which would have held the glazing, now missing. Again, the iron opening mechanisms are still extant. The vines are now entwined around these struts. The brick plinth returns to the N where the doors would have been located. At the W end of the rear wall is a blocked boarded door in heavy concrete surround and a similar window, both probably late C20. At the E end, the wall returns sharply to the NW and then curves round to form the front wall of 2 rear lean-tos. These are single-storey, of roughly coursed stone with corrugated roofs, with full height openings and C20 windows with stone or concrete-rendered jambs.

Listed for their character and the historical associations with fruit growing at Margam Park. Group value with other structures in Margam Park.