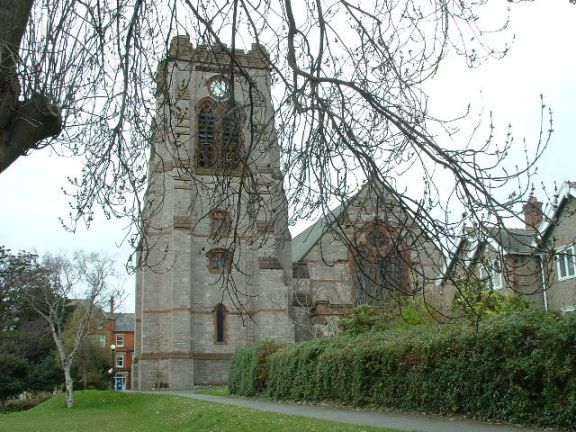 Location: Occupies a block of land at the centre of the town between Woodland Road East and Rhiw Road.

In c1870, the growing resort of Colwyn Bay was part of the parish of Llandrillo yn Rhos. The first congregation in the new resort met in a carpenter’s shop in 1871, and the first church on the present site was a mission chapel, built in 1872. An iron church was built in stages - the nave, aisles and transepts in 1887-8, the chancel added in 1894, the tower completed in 1911. The architects were Douglas and Fordham of Chester. The western narthex was added as a war memorial in 1920, designed by W D Caroe. Colwyn Bay became a separate parish in 1893.

Roughly coursed limestone rubble with Runcorn dressings and bands; slate roof. Cruciform plan: nave with narrow lean-to passage aisles and high clerestory; shallow transepts, chancel with organ chamber and vestry projecting to N and S. Massive tower at NW angle of nave, and narthex to W. Narthex has central entrance to W, in deep moulded archway with lettering in outer ring of the arch, beneath steep gable projecting above the parapet. 2-light Decorated windows flank the entrance. 5-light geometrical traceried W window set in moulded relieving arch to nave. Heavy angle buttresses to tower which has wide deeply moulded E-facing entrance with statue in niche over it. Stilted arched windows above, and tall paired bell-chamber lights with 3 tiers of quatrefoil tracery. Clock above; embattled parapet, slightly corbelled out. Battered buttresses clasp the 3 bays of the N aisle, between the tower and the transept, and the 4 bays to S aisle between the canted baptistery and the transept. Round headed relieving arched to tall plate traceried clerestory windows, and paired flat-headed lights to aisles. Geometric tracery to 4-light transept windows, with rose window in apex of S transept, and lean-to porch in E of N transept. Triple window to organ chamber which projects from N of choir, and square headed window composed of 4 quatrefoil lights in its E wall. Complex 7-light geometric traceried E window to chancel in moulded relieving arch.

W narthex of 3 bays width, with rib vaulted ceiling; chamfered arches to nave, dying into straight responds. Memorial altar against S wall. Western bay of nave opens out into baptistery to N, and porch in base of tower to S. This porch is divided from the nave by a richly worked limed oak screen and doors, erected as a memorial to Rosina Forsyth Conwy who died in 1934. Similar in detail to the reredos, so perhaps the work of W D Caroe. Font in baptistery has simple cylindrical basin with low relief inscription band, carried on clustered shafts with wood and wrought iron hood. Wide nave with arcade of 4 bays, with chamfered arches dying into straight responds. Long fluted corbels carry wall posts of principal trusses of wagon roof: these are derived from a hammer-beam principal, with solid curved braces carrying the base of the truss away from the wall line. Narrow passage aisles to either side, with paired splayed windows. Very wide transepts with asymmetrical arches: the double chamfered arches die into the W respond but are carried on moulded corbel brackets to E. Deep moulded chancel arch has clustered shafts carried on enriched fluted corbels. Pulpit on stone base, with cast iron balustrade and openwork wood traceried panels to N. Wrought iron chancel rail raised up steps. Chancel distinguished by a richer decorative scheme to the roof: stone clustered shafts form wall posts, and the wall plates are decorated with an ornate quatrefoil frieze. The sanctuary is further distinguished by the use of traceried panels in the roof. Simple but robust moulding to sedilia and piscina.

Furnishings: intricately worked choir stalls, designed by John Douglas, with traceried arcaded and canopied rear screen, richly worked bench ends with stylised poppy heads, traceried panels and inset roses. Seat backs are divided by pilasters with shallow traceried panels. Organ behind to the S, now balanced by a painted screen in the N transept. Reredos designs by W D Caroe, and made by Messrs Boulton of Cheltenham in 1935: exquisitely worked in limed oak: 2 tiers of panels to either side, with decorated frieze and mid rail. Intricate filigree work to canopied niches, housing reliefs and figures of saints. High relief central panel (the supper at Emaeus), standing out from a gilded and painted ground. Free-standing riddle posts to either side.

Stained glass: E window: a rich Neo-Renaissance window of c1900; W window and narthex windows, by Horace Wilkinson, 1920-1. Various late C19 and C20 windows in aisles, some by Shrigley and Hunt of Lancaster.

The church is a notable landmark in the centre of the town, and an excellent example of late Victorian church architecture, combining bold planning, and robust detailing. It is also particularly rich in the craft and quality of its fittings.