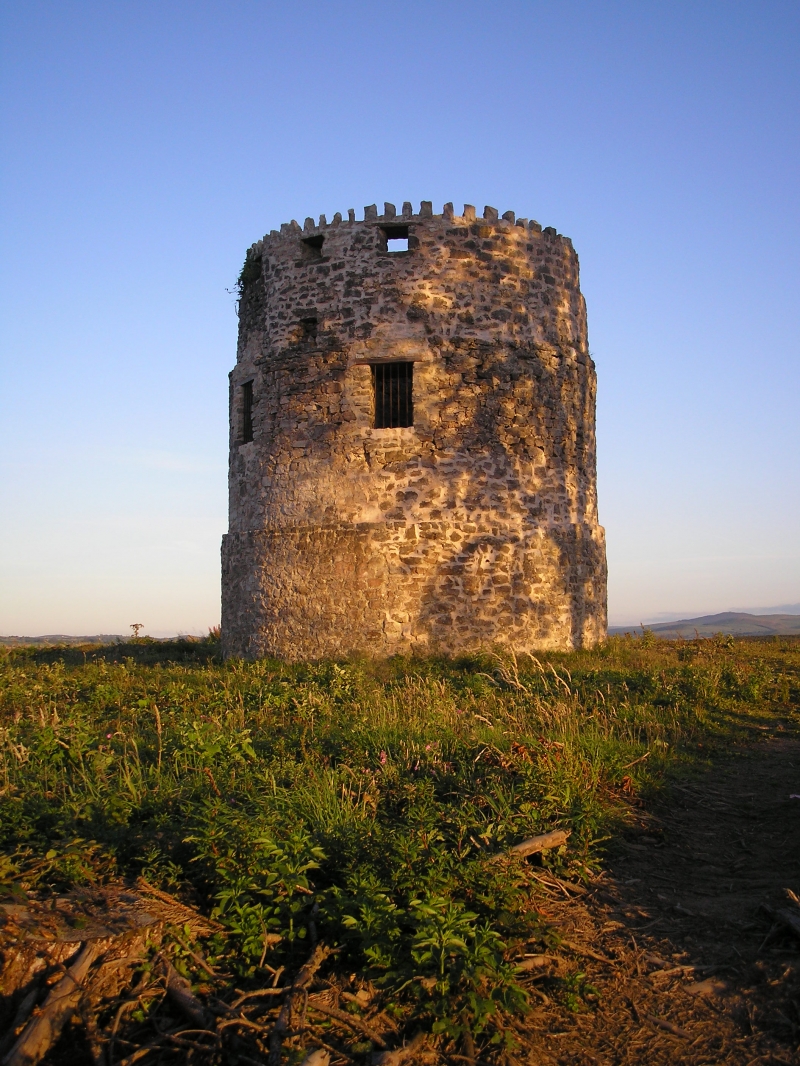 Location: Located on top of the hill in Coed y Garreg woods at the highest point in the parish. Accessible by footpaths from the S and W.

Reputed to be a Roman pharos but there is no evidence to support this. Probably early C17 and used for various functions. It was perhaps built as a windmill and is labelled as such on a Mostyn estate map of 1732. The structure is also described as an unlit maritime beacon, shown on Williamson's chart of 1766, and as a watchtower to look out for pirates. The arrangement of small square openings on the N side, overlooking the Dee estuary, might correlate with this latter theory. It was restored and converted to a picturesque folly in 1897 by Baron Mostyn.

Ruins of a circular tower of rubble stone which diminishes in girth by stepping in 3 times. The top appears to have been levelled-off to make parapets, with coping stones on edge. Doorway to S side with dressed stone jambs, mainly missing to L. The doorhead is missing but a dressed stone tablet has been inserted above which reads 'This Roman pharos was restored by Llewelyn ... Baron Mostyn in commemoration of the 60th year of the glorious reign of Victoria, Queen and Empress, June 20th 1897'. The 2nd stage has rectangular openings to the N and NE sides. Both have lost their heads but a timber lintel has been inserted above the former. Between these openings to the 3rd stage is a recess. At the top, around the N half, are the remains of 4 small square openings with stone sills and lintels (some lintels missing), possibly look-out holes.

The doorway has splayed jambs and the walls are very thick. To the E and W sides of the 1st stage are pairs of very deep sockets, but the opposing pairs are not aligned with each other. Further sockets and recesses to upper stages. There was formerly a staircase.

Listed as an early and unusual structure of unclear function, latterly restored as a Victorian folly.