A Grade I Listed Building in Llanasa, Flintshire 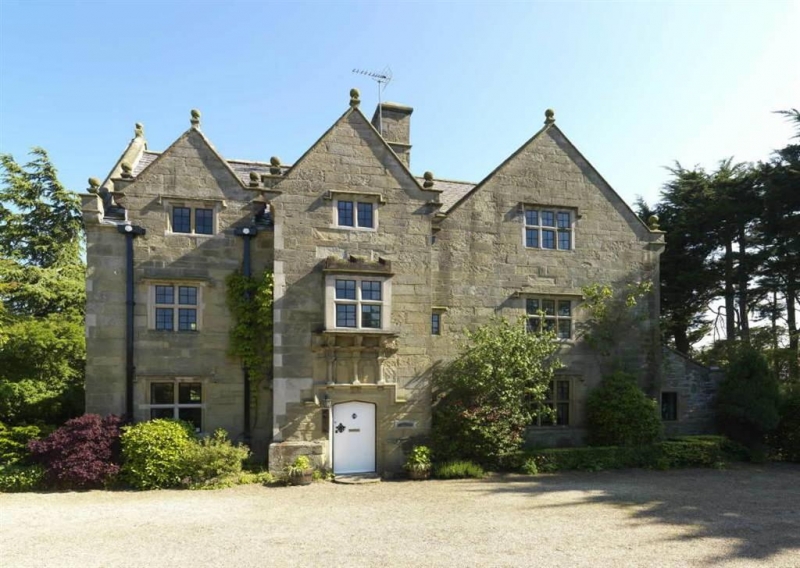 Location: Approximately 100m NW of Llanasa church, on the S side of the Llanasa to Gwespyr road, set back from road behind a high forecourt wall.

An asymmetrical Renaissance 3-storey 3-bay house of ashlar with a slate roof behind coped gables with ball finials and stone stacks. The front has 3 unequal gabled bays with ovolo-moulded mullioned and transomed windows (part renewed with reconstituted stone) under hood moulds. The narrow storeyed porch is offset L of centre. It has a boarded door, above which is a 2-light oriel on brackets rising from Doric wall shafts that stand on the hood mould of the doorway. Between the 2 shafts are worn figures in relief, while the outer sides of the shafts have relief strapwork. Beneath the shafts are 3 small heads below the hood mould of the doorway. In the upper storey above the porch is a 2-light mullioned window. Immediately R of the porch is a small window in a dressed stone surround, with a similar first-floor window. The hall on the R side is the widest of the bays, and has 3-light windows, while the parlour bay on the L side has 2-light windows, without transom in the upper storey.

The L side wall of the parlour bay has 3-light windows, and beneath the apex of the gable is a round-headed niche with a kneeling figure in relief, while the spandrels are engraved '1645 PF' beneath the hood mould. The short rear wall of the parlour bay has 2-light windows to the parlour and the room above. The service rooms behind are rubble stone. On the R side, facing the parlour, are 2-light mullioned and transomed windows to the ground and middle storeys, and a 2-light mullioned window in the upper storey beneath a gablet.

The rear elevation is double-gabled, the L-hand gable wider and brought forward. It has 3-light mullioned and transomed windows and 3-light cellar window with plain chamfer. The R-hand gable has windows offset to the L side, comprising 2-light mullioned and transomed windows lighting the stair, with a smaller upper-storey window in dressed surround. A 2-light window is at the base of the cellar stair, projecting forward beneath a stone slab lean-to roof. To the R of the windows is an added doorway with glazed door, and an added external stack on the R side.

The R side wall of the house has a lean-to set back from the front elevation, of rubble stone and slate roof behind a coped gable. Facing the front is an iron-framed casement window in a stone surround. The side wall of the lean-to has a 2-light mullioned window incorporating iron-framed casements, and a boarded door on the R side under a Tudor-headed lintel. A diagonal buttress is at the R end, further R of which is a rubble stone wall and added conservatory. In the middle storey is a 2-light mullioned to the L, R of which is a massive projecting stack, the upper portion of which is a C19 rebuild in coursed stone. A 2-light window is to the R of the stack in the middle storey.

The house has a lobby-entry plan, and opens into the parlour rather than the hall. This has a fireplace with ovolo-moulded stone jambs and lintel. Spine and cross beams are ovolo-moulded, with ogee stops, and plaster panels have mouldings at the margin. The hall has a wide fireplace under a segmental arch with voussoirs, and beams similar to the parlour. The service room rear R has a C19 Tudor style stone fireplace.

Behind the hall and parlour is a full-height dog-leg stair with turned balusters and larger turned newels with ball finials, and moulded strings and hand rail. On the L side of the stairway is a full-height timber-framed partition. First-floor rooms retain beams and plaster panels similar to the parlour below. In the upper storey a long gallery occupies the full length of the R side of the house. It has a 4-bay arched-braced roof. The windows have mainly ovolo mouldings to the internal faces of the mullions, except the stair where they are all left without moulding. The porch and base of the stairs retain lozenge-pattern stone paving.

Listed grade I, Henblas is a substantial mid C17 gentry house of ambitious design incorporating double-pile plan and a long gallery, of exceptional interest for the almost complete survival of its plan and detail.