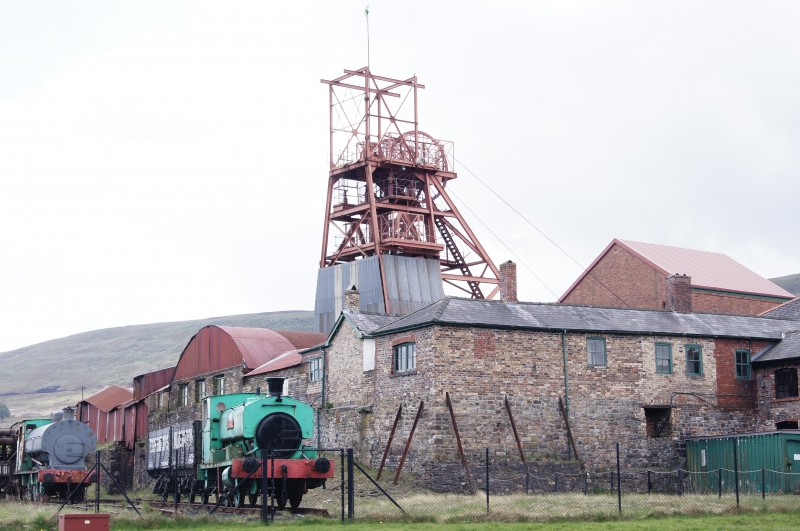 Location: Situated at the north-east edge of the site.

The original winding house, built in the late nineteenth century, stood here. Part of its stone base survives in the south-west elevation of the pit head structure. Original wooden headgear was replaced in 1921 by the existing steel joist headgear. The shaft continued in use to 1973 for winding coal and to 1976 as a means of access for the miners. Big Pit was operated in connection with Blaenavon Ironworks, then by the National Coal Board from 1947 to 1980. Underground workings date from the early C19 but the shaft on this site was sunk in 1860. The present surface structures date from between c1900 and the 1970's. This piecemeal development was typical of mines in South Wales and it is now the most complete remaining, having been reopened as a museum in 1983.

The pit head is a stone and brick construction with steel joist superstructure. The tram circuit is continuous with the pit head and consists of a loop of corrugated iron and brick sheds. The lower part of the north-east elevation of the pit head is stone. Above this is brickwork incorporating three square-headed windows. The brickwork continues into the tram circuit, although here the elevation is mainly of corrugated iron. On the south-east elevation, construction is mainly brick with some sheets of iron. The bays are intersected by supports of cast iron pipes and RSJs. The corrugated iron roof is pitched over the tram circuit and barrel vaulted over the north end of the pit head. Steel joist headgear rises from the pitch of the south end.

The shaft equipment is intact, with double cage, banksman's cabin and pit top control cabin. Wooden benches with rubber counters at the north-east end hold the miners' hats. From here rails lead to the tram circuit. On the north-east side of the tram circuit is the 'tippler' and, suspended from the roof structure, the remains of weighing scales. Rails continue around the circuit, which includes a 'creeper' along its length. An electricity substation is at the north-west end.

Included at grade II* for its importance as a rare survival of pithead gear with tram circuit and as the focal point of this exceptionally complete colliery site.