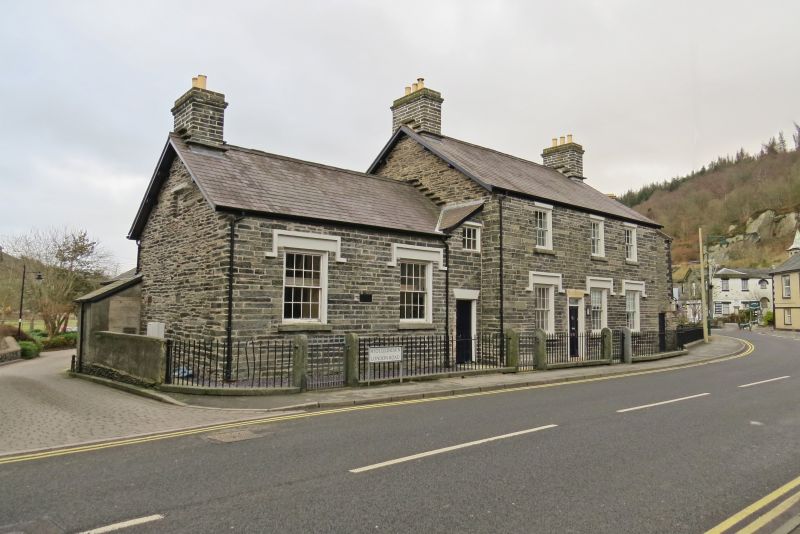 Location: Close to the junction of London Road and High Street.

A police station had been established on London Road by the mid C19: the present building is said to date from 1871, purpose-built as a police station and courthouse, and in use until c1978. Now a private hotel.

Police station and house comprise a 2-storeyed 3-window range block to the right of the site, with the single storeyed courthouse (now bisected with an inserted floor) to the left. Former police station has central entrance in added gabled porch to the left of centre. Lower window openings all have painted stone heads with drop-ended hood-moulds. 16-pane sash window to left of doorway is an original feature, the far right hand window inserted to match it in what was formerly a blind panel. Immediately to right of door, the window space contains a small, barred light (formerly lighting the passage to the cells). Upper windows are 12-pane sashes (that to right inserted) with flat arched painted stone heads. Right hand gable return has 3 high-set cell windows on each floor (one on each floor blocked, and with 2 inserted windows below the original lights). Courthouse to the left retains the original large 16-pane sash windows, with painted stone lintels with drop-ended hood moulds. Gabled dormer added in roof when a floor was inserted, c1980.

The courthouse has been bisected and subdivided, and there have been minor changes to the layout of the police station and house, but the cell area survives largely as originally set out, with a wide corridor giving access to 3 cells on each floor. The original iron gates to the ground floor corridor survive.

A very good example of a small vernacular and purpose-built courthouse and police station, which is particularly noteworthy for the survival of the cell area within the main building.