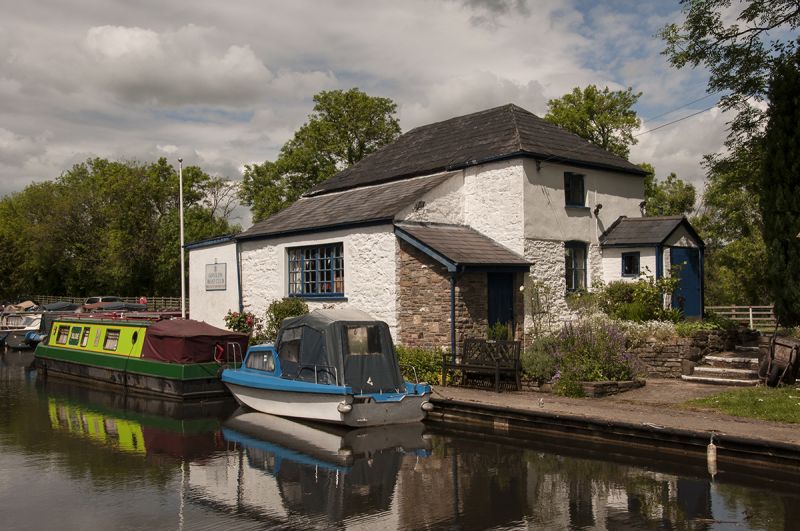 History: Built c1821 in association with Govilon Wharf and possibly as a canal-side office building. Govilon Wharf was a key point on the canal for the local iron industry constructed to serve the terminus for Bailey's Tramroad from Nantyglo Ironworks; this tramroad was opened on 6th December 1821. The canal as a whole was linked to many tramroads and was important for trade in iron, lime and coal. Although this section of the canal was completed in 1805 under Thomas Cartwright, Govilon Wharf, together with its associated buildings, was constructed after 1821. Modern alterations and now in use as part of Govilon Boat Club.

The Brecknock and Abergavenny Canal (now known as the Monmouthshire and Brecon Canal) was constructed between 1797 and 1812. Gradually the railway took traffic off the canal and eventually it was bought out by the Great Western Railway. Restoration work began in 1964.

Description: Rectangular whitewashed rubble canal-side building with hipped slate roof. Elevation facing canal has lean-to and modern extension to west; camber-headed openings to part-rendered east end with 4-pane casements and gabled porch. North side, away from canal, retains a square-headed 12-pane sash to left and an iron, 20-pane, fixed-light, window to right with a cambered head and voussoirs. Projecting masonry to centre, perhaps a former chimney breast. Lozenge-shaped weight-restriction panel retained and a relocated B & A C Co round-headed milestone.

Included notwithstanding alterations as a surviving C19 Brecon and Abergavenny canal building which has group value with other listed items at Govilon Wharf.
Reference: R A Stevens, Brecknock & Abergavenny and Monmouthshire Canals (Towpath Guide No 2), (Cambridge, 1974), p51.