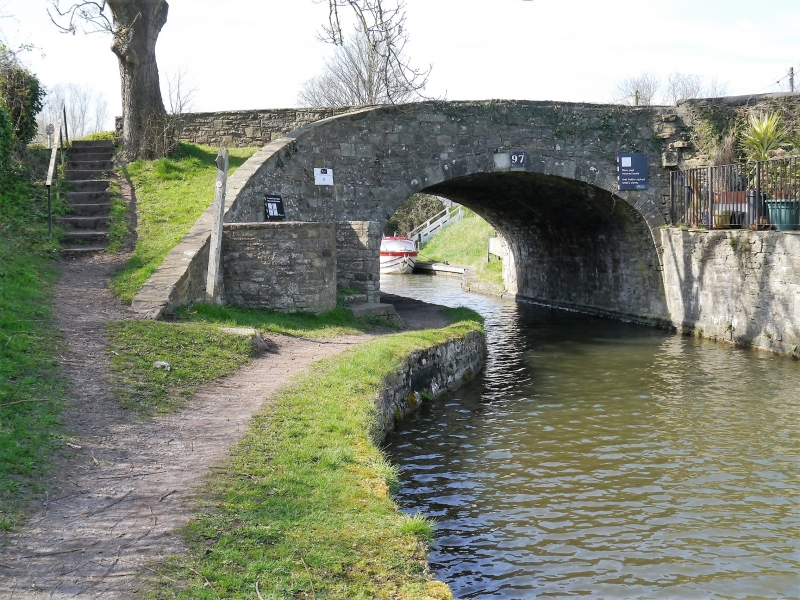 Location: Carrying the Blaenavon road over the canal to east of Govilon Wharf; tow-path to the south side.

History: The Brecknock and Abergavenny Canal was promoted in 1792 to connect the upper Usk valley to the Monmouthshire Canal at Pontymoile and from there to the sea at Newport. Construction began in 1797, with Thomas Dadford as engineer, and the first section, from Gilwern to Llangynidr was completed in that year with the stretch as far as Brecon following in 1800. Work then stopped for a time with the result that the section to the Blaenavon Road east of Govilon was not completed until 1805, now with Thomas Cartwright as engineer. Further funds had to be raised and the last section from west of Llanfoist to Pontymoile was completed between 1809 and 1812, with William Crosley as engineer. Linked to tramroads, the canal was an important artery for trade in iron, lime and coal. In 1865 the Monmouthshire and the Brecknock and Abergavenny Canal Companies merged becoming the Monmouthshire and Brecon Canal Company. Later still the canal was bought out by the Great Western Railway and gradually the canal was run down until it was finally abandoned in 1962. Restoration work was begun in 1964 and is still ongoing.

This bridge is at the junction of the section completed in 1805 under Thomas Cartwright and that begun in 1809 by William Crosley and may belong to either date. It has also been widened to the west where it was crossed by Bailey's tramroad from Nantyglo Ironworks; this was laid in 1821.

Description: Standard single arch coursed rubble canal. Segmental arch has voussoirs. Keystone, with number 97, only to the east side and no keystone to west (Govilon) side where the bridge has been widened. Evidence for the widening is a straight joint and visible bases of the old voussoirs. Rubble abutments and simple, rebuilt, parapets, ramped to original side and straight to widened side.
Included for group value with other listed items at Govilon Wharf as a surviving early C19 Brecknock and Abergavenny canal structure.