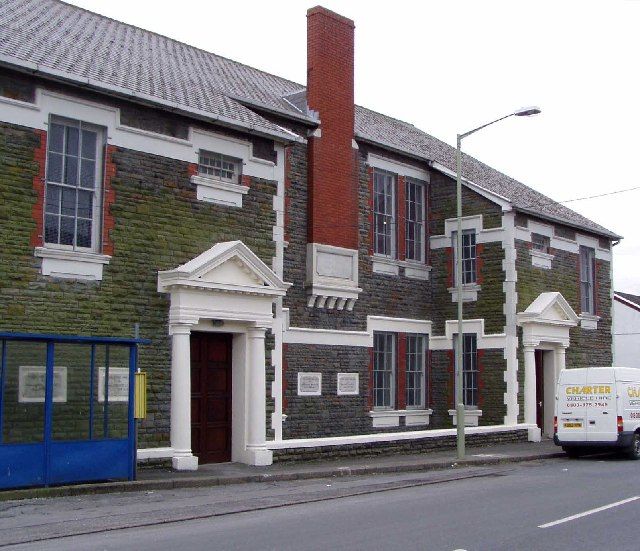 Location: Located onto the new road, N of Maesteg, and backing on the the Great Western Railway line.

Built 1924 - 1926. Designed by Oswal Davies and built by Messrs Jenkin Davies and Owen Jones on behalf of North Collieries.

Built of coursed rock-faced stonework with painted brick quoins, and unpainted detail. Modern slate roof. Strictly symmetrical, with recessed centre of 2 bays, and forward wings, also of 2 bays containing the entrances; two identical Tuscan porticos on columns, each surrounding a pair of panelled doors. Six foundation stones prominently displayed, all laid in 1925. At the centre, a corbelled chimney in red brick, the top probably altered, bearing an inscribed panel reading NANTYFFYLLON WORKMEN'S INSTITUTE 1926. To either side, a pair of large 12-pane sash windows with stone lintels and labels, and stone sills with aprons. The wings have one similar window in the outer bay, linked by the label string to a small paned window over the entrance each side. Two storey bays at each end, similarly articulated. The roof is drawn down over the front bays, and hipped over the end bays. The rear and ends are pebbledashed, with 2 tiers of similar windows.

A dog-leg stair leading off the entrance lobby in each wing leads to an upper assembly hall of 6 bays, with procenium arch. On the ground floor a 5-bay dining room.

Included as an historically interesting and late example of a miner's institute which has retained its original windows and character.