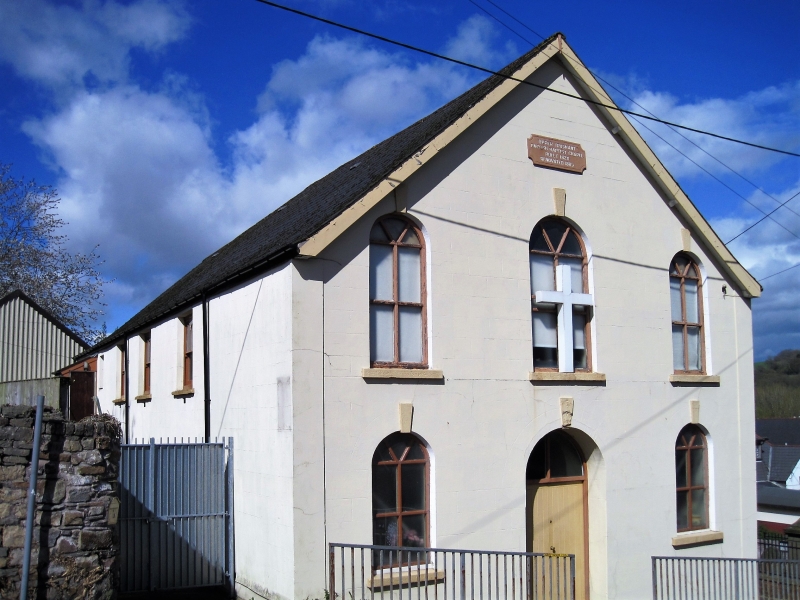 Location: At the south end of Pontypool town centre about 40m west of Clarence Street

The congregation was formed in 1776 and worshipped in a house at the bottom of the burial ground. When more room was required the present chapel was built in 1826 and was enlarged and altered in 1896. It has remained unchanged since then apart from the removal of the classical decoration on the entrance front. The land was purchased from the Monmouthshire Railway and Canal Company whose canal (railway after 1852) ran immediately to the west.

A chapel of two builds originally of traditional long-wall facade type and given a gable front in the 1896 re-modelling. A long narrow rectangular block with gable end to street. Rendered and painted, presumably over stone, with an artificial slate roof.
Entrance elevation : The gable end formerly had pilasters but these have been removed. Two storeys, three windows, all arched with keystones and modern replacement glazing. Central replacement panelled door with fanlight over, arched head and keystone. Plaque in gable inscribed Built 1826. Renovated 1896. Projecting eaves with plain bargeboards, probably altered when the decorative features were stripped off.
East elevation has five bays of which the ones at either end may be an addition of 1896, or maybe only the one at the far north end (this view seems to be confirmed by the O.S. Map for 1882. The first bay is blind then there are three bays with with unusual Gothic glazed sash windows three over three. These are framed by giant Tuscan pilasters which reach to the eaves. The far north bay has a plain later window.
West elevation has the same window treatment but no pilasters.
North end has a later addition of a small Chapel Room.

The interior was altered in 1896 when the chapel was enlarged and appears to be unchanged since then. Raked gallery on three sides supported on iron columns decorated with spiral grooves and foliate capitals. The gallery fronts are panelled with diagonal boarding. Unusual raked floor. All benches and pews survive with the other fittings. Decorative iron rail before the 'set fawr', and classical panelled 'reredos' behind the preaching desk. Plaster cornice and coving; flat panelled timber ceiling with decorative iron ventilators.

Listed for the special interest of its origins as an early C19 chapel and for the distinctive and well preserved character of the late C19 interior.