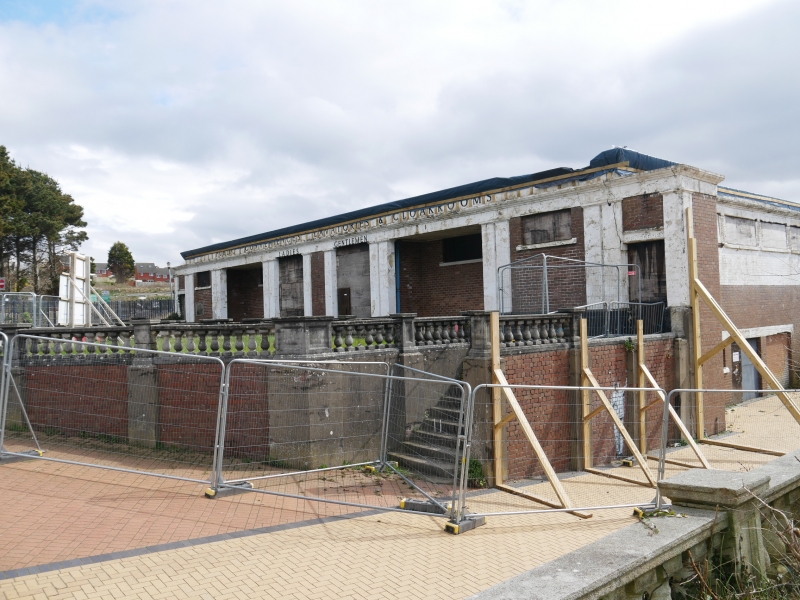 Location: At the eastern end of Whitmore Bay above the seafront promenade facing onto Friars Road

Public conveniences. Concrete with brick panels. Flat roofed single storey structure with irregular symmetrical 8 bay neo-classical façade with cornice and pilasters dividing the bays. Entrances are central with the Ladies to the left and Gentlemen to the right, recessed enclosures outside of these and doors to outside bays. Signage along the frieze in raised steel lettering reads 'PUBLIC CONVENIENCE LAVATORIES & CLOAKROOMS, along the architrave 'LADIES' and 'GENTLEMEN' above either door. Narrower to the rear with high level windows (blocked at time of inspection), corner pilasters, continuous cornice and ramps to roof level. Double doors and side windows to lower ground floor on downhill side.

To the front of the building are two triangular enclosures bounded by concrete piers and balustrades on brick plinth walls.

Included for its historic interest as an integral component of the complex of structures constructed during the inter-war period at Barry Island as part of the development of the Island as a seaside resort. Important also for its architectural value as a good example of a well designed and well preserved public convenience of definite quality and for its group value with the other structures of the inter-war and earlier developments.