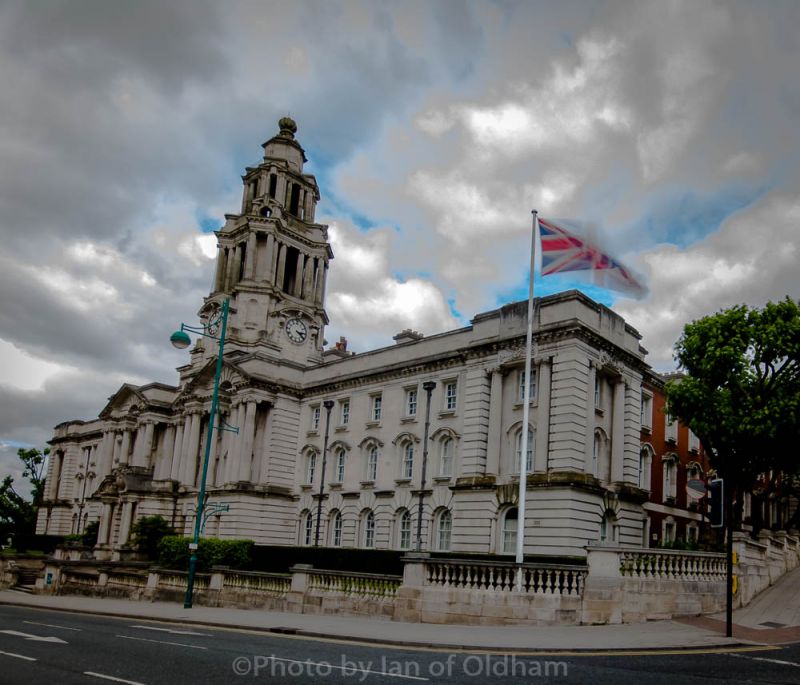 PLAN: Almost square, with a grand entrance sequence on the west side (Wellington Road South), public hall on the east side (Lacy Street) with an entrance foyer on the south side (Edward Street), and council chamber and committee rooms in the centre separated by an anteroom. The anteroom links the galleried landing of the entrance hall, reached by a grand double-return staircase, with the public hall to the rear thus forming a grand processional route. Corridors with outer committee rooms and offices run around three sides on three floors, with various entrances. Site upon which the building stands slopes uphill towards rear (Lacy Street), resulting in a lower ground floor, upper ground floor, and first floor.

EXTERIOR: Built in a free English Baroque style. Symmetrical front elevation with slightly projecting end pavilions with channelled rustication to cornice height. Round-headed windows at lower ground-floor level and giant order framing the windows on the two upper floors. Either side of the central, projecting entrance bays are five-bay window ranges with channelled rustication to the lower ground floor and round-headed windows. Upper ground-floor windows have segmental heads and first-floor windows have flat heads, with modillion cornice and plain parapet. Main entrance, on the upper ground floor, is approached by steps up from the street with low walls with carved scroll motifs. Paired columns support a broken and open segmental pediment framing a cartouche of the Borough Arms with putti on each side. Framing the entrance is a double portico with a high channelled rusticated base with arched openings breaking into tympani. Central tower rises in diminishing stages, with a solid base with clock faces supporting two tiers of open colonnades with projections at the angles, a polygonal top and crown finial.
At east end of south side (Edward Street) is a grand entrance to foyer and public hall. Portland stone with projecting piers with channelled rustication and oculi framing an Ionic colonnade. Above and set back is a round-headed window framed by an open segmental pediment, with cartouche of Borough Arms flanked by two windows with flat heads.
Low, balustraded Portland stone wall runs along front of main façade on Wellington Road South and Edward Street elevation.

INTERIOR: Main entrance (Wellington Road South) leads to a domed, top-lit entrance hall with grand double-return staircase. Lower ground-floor walls are cased in Brescia and white marble, with square Brescia marble columns, and black and white chequered marble floor. Staircase of Sicilian marble, with wrought-iron balustrade with bronze wreaths and scrollwork, rises in one central flight and divides to left and right at half-landing to galleried landing on upper ground floor, with domes and pendentives supported by monolithic Brescia marble columns. The walls are cased in Brescia and white marble to dado height and domes and ceilings encrusted in ornate plasterwork. Corridors lead off the galleried landing.
To east of galleried landing is the council anteroom, with a row of three glazed domes with pendentives, columns and pilasters, richly ornamented ceiling plasterwork, panelled oak wainscoting, and three-panelled doors with eared architraves and large brass finger plates.
On south side of anteroom is the council chamber, with a large central dome and pendentives, with grouped fluted columns at the corners. Carved oak furnishings in style of Grinling Gibbons; benches with fronts carved with allegories of Honour, Liberty, Truth, and Justice, mayor's dais with chair and table, and panelling surmounted by Borough Arms, panelled wainscoting. Craftsmen were White of Bedford, H H Martyn of Cheltenham, and Goodall, Lamb & Heighway of Manchester. Chamber is lit by four lunettes with armorial glass, and a scene of the presentation of Stockport's first charter. Ceiling is covered in decorative plasterwork.
To east on same side is a men's lavatory with green marble partitions, and urinals by Jennings.
On north side of anteroom are three committee rooms, which can be united by sliding screens to form a large reception room. Each room has a coved ceiling with ornate plaster diaperwork and a central balustraded glazed dome. Panelled in oak, with paired square, fluted oak columns with ionic capitals supporting the cornice above the partition screens. Outer rooms each have a central fireplace in the end wall. Windows have armorial and pictorial glass of the Barons of Stockport.
To east of anteroom is the public hall. Barrel vaulted with lavish plasterwork, lit by tall round-headed windows on the east side with armorial and pictorial glass of the Earls of Chester. At north end is a stage with proscenium arch with large scrolls on each side and central cartouche. At south end is organ loft with Wurlitzer Publix One organ. Anteroom behind stage with stained glass of scenes and text from history of Stockport. Entrance foyer, on south side, has a gallery with central, balustraded opening and a colonnade supporting a dome.
On west side of galleried landing (above main entrance) is a suite of mayoral rooms. Oak wainscoting, fireplaces with panelled and mirrored chimneypieces, and moulded cornices.

Public spaces and council rooms are lit throughout by C17 style brass electroliers by Singers of Frome. Stained glass is by Bryans & Webb of London, decorative plasterwork by J Tanner & Son of Liverpool, with plaster moulding by G P Bankart, stone carving by J J Millson of Manchester, and the furnishings were designed by the architect.

HISTORY: Stockport became a County Borough in 1888, and serious discussions regarding the provision of a town hall began around 1893, culminating in 1903 in the securing of the old National School site on Wellington Road South, and the running of a competition for the design, assessed by Thomas Colcutt. The winning architect, Sir Alfred Brumwell, had previously designed the influential Belfast City Hall of 1898. The foundation stone was laid on 15 October 1904, and the building was opened by the Prince and Princess of Wales on 7th July 1908.
The rare Wurlitzer Publix One organ in the public hall was brought later from another location. It was made in America in 1930, and is one of a production run of only fourteen.

REASONS FOR DESIGNATION DECISION
Stockport Town Hall is designated at Grade II* for the following principal reasons:
* It is a building highly expressive of civic pride, shown both in the architectural grandeur of its exterior and in the lavish exuberance of its interior
* The principal elevation of high quality white Portland stone topped by an elaborate tall central tower is a dominant feature upon the streetscape
* The grand design of the Town Hall, which incorporates carved stone cartouches of the Borough Arms, is a symbolic expression of the enhanced civic identity of Stockport
* The winner of the design competition was a national architect who had previously designed Belfast City Hall amongst other civic buildings
* The combination of top quality materials and craftsmanship creates a remarkably opulent interior which survives largely as built, including an almost complete ensemble of original fixtures and fittings
* The decorative combination of marbles, iron work, bronze work, brass, plasterwork, leaded and stained glass work in the entrance hall, main staircase and galleried landing achieves a sumptuous richness of colour, texture, and display
* All the main public spaces and Council state rooms have richly ornate plasterwork ceilings, culminating in the exhilarating flamboyance of the vast barrel-vaulted Public Hall
* Throughout there is a close attention to details and materials used, down to the specially commissioned bronze electroliers which survive throughout
* The Council Chamber is particularly fine as it retains its complete set of original carved oak fixed benches and Mayor's dais, designed by the architect
* Fine stained glass depicting notable local figures, historical associations of the town, and armorial glass can be found throughout
* The building has a well-designed layout which has been carefully thought out to accommodate both the official and public functions of a town hall and the provision of office space for council departments