A Grade I Listed Building in Audlem, Cheshire East 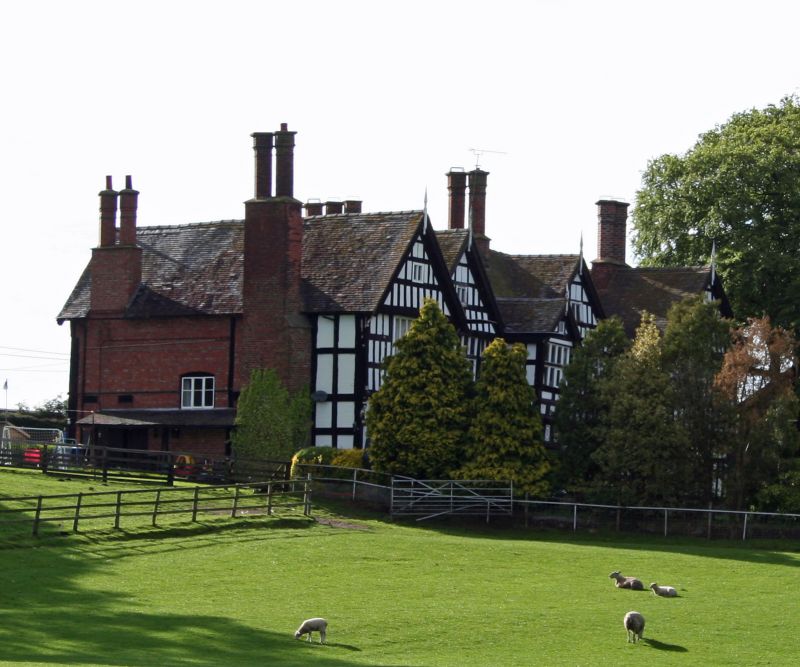 AUDLEM C.P. (Off) CHESHIRE STREET
SJ 64 SE
Moss Hall
8/4
10-6-52
- I
Manor House. Early C17. Timber framed with rendered infill and brick
with a plain tile roof. Two storeys with attics. Entrance front: of
5 bays near-symmetrically disposed in E-shaped arrangement. Ashlar
plinth with chamfered top common to the whole building and close
studded framing with a middle rail to both floors. Central 2-storey
gabled porch wing, which is a later addition, with moulded door
surround to the ground floor with dying stops. Within the porch are
pieces of C18 or early C19 dado panelling and wall seats. The door
has 5 panels and is of C17 date. The first floor is jettied,
supported on carved brackets, with an ovolo-moulded bressumer.
Decorative infill to the panels below the first floor window which is
of four lights with an ovolo-moulded surround. Single-light window to
the gable above. The left and right hand flanks also have
close-studding with a middle rail to each floor and jettied first
floor with moulded bressumer supported by brackets. The ranges to
either side originally had T-shaped windows set in close-studded
walls. These windows had ogee-moulded surrounds and a row of 13
lights above the middle rails, which combined to run across the whole
of the upper walling, and five lower lights below an ogee-moulded
transom at the centre. This arrangement also applied to the lateral
projecting gabled bays, save that the left hand bay which is less wide
has 9 lights, the central three of which continue below the middle
rail. This overall arrangement has been altered by later insertions
and blockings. At ground floor level to the right of the porchway the
central 5 lights have been replaced by a 3-light C19 casement window
and the four lights to the upper wall at either side have been
blocked. To the left the central five lights have again been replaced
by three C19 lights and the four upper lights at the right have been
extended below the middle rail down to the level of the central
window's sill. The close studding and upper windows to the left of
this have been replaced by new close studding which incorporates no
window mullions. To the first floor above these bays are at left a
complete T-shaped window with 5 central lights and 4 upper lights to
either side all intact. To the right this arrangement has been
augmented by the lowering of the right hand upper lights so that they
fall to the level of the central sill. The right hand projecting wing
has central 5-light transomed windows to both floors but the upper
4-light windows at either side are all blocked. Each of the four
lateral bays is surmounted by a gable containing mullioned windows of
2 x 2 lights. All of these have been reduced by blocking the upper 2
lights. The gables and the first floor are jettied and have moulded
bressumers and brackets. Ridge chimney stacks at right of centre and
to right hand gabled wing. The right hand side of the house has close
studded walling with middle rail with an angle brace at the far right
hand side. To the ground floor a lean-to porch has been added at left
and a garage door at right. To the first floor at left of centre is a
jettied gabled bay which has close-studded walling and a 3-light
mullioned window to the gable with a single-light window above. To
right and left of this are 5-light mullioned windows with
transoms, the right hand one of which has a C20 3-light casement
window inserted at centre, the left hand one now having blocked
lateral lights. To left of this is a 2-light window and at right are
two 3-light casement windows. The left hand side of the house has at
the right a massive chimney stack with a lower body of ashlar with
brick above. The rear has a projecting wing at right with timber
corner posts, brick infill and 3-light C19 casement windows to the
ground and first floors. To the left of this is a lean-to of 2
storeys with a 2-light window to the first floor. To the left hand
side is a double gabled wing with stone plinth and moulded bressumer
on moulded brackets to the jettied first floor and fragments of timber
framing to the upper wall of the right hand gable. The left hand
flank of this wing has close studding with middle rail, and angle
braces to the upper wall at first floor level. The recessed central
portion has a massive chimney stack at right with offsets of ashlar to
the lower body and rendered brick above.

Interior: The entrance through-passageway has run-through panelling
to either side, that at left forms the only division between this and
the present sitting room and has ashlar blocks to its lower body. The
sitting room has two doors of twelve panels with strap hinges, that to
the panelled wall having two decoratively moulded panels above the
lintel. Running around the lower body of the outer wall and the
panelled wall is a low continuous bench with turned legs and a
chamfered and moulded rail. Jowelled posts supporting two
ovolo-moulded ceiling beams, the jowels-taking the form of moulded
brackets. Small-framed walling to ground floor cross passage.
Ovolo-moulded ceiling beams to two further ground floor rooms, one
having jowelled wall posts and two similar wall posts set at either
side of a C20 brick hearth. The parlour at front of the left hand
projecting wing has an ashlar chimney piece of the type already
described with a moulded wooden surround with pilasters to either side
resting on plinths with moulded central panels. The fluted pilasters
have cabling to their lower bodies and egg-and dart moulding to the
capitals. Decorated moulded panels in line with the pilasters and
between these are three round-arched panels painted with coats of
arms. Moulding to the lintel above. Encased ceiling beams and
panelling of possibly early C18 date which encases jowelled wall
posts. Mid C18 buffet cupboard to wall opposite fire place with
raised and fielded panelling to the double doors, a segemental
pediment above and fitted shelves. To the first floor above is a
further panelled room with similar fire-surround and painted panelling
with the single rail of run-through panelling to the lower body.
Cupboard to right of hearth with swans neck hinges. Moulded plaster
cornice. Room across the passage from this with altered panelling.
The great chamber has two panels of plaster pargetting, one of heart
shape enclosing bunches of grapes, the other showing a console from
which are suspended three bunches of grapes. Large ashlar fire
surround of the form seen elsewhere. The through-passageway in the
right hand wing at first floor level has small framing and plank doors
with moulded vertical rails, one having an ovolo-moulded surround, the
others having C18 surrounds. The staircase has a turned newel of
early C17 date. There are six ashlar fire surrounds, one to the
ground floor and five to the first floor, all having 4-centered
moulded arches which die to a square base with octagonal bell stops
and each having a cyma-moulded cornice above. These project into the
room space to an unwonted degree in two of the rooms, indicating some
possible remodelling of the house. The attics show chamfered purlins
and wind bracing. The roof also appears to have beef remodelled with
some principals cut through and others meeting without being jointed.
The trusses also appear to have supported a wider roof at one stage.
One staircase balustrade has square newel posts supporting a chamfered
banister rail and faceted ball finials. One further staircase
balustrade with ovolo-moulded hand rail and turned balustrade. The
basement has a plank door and ovolo-moulded ceiling beams.
A surprisingly complete example of a gentleman's house of the early
C17.