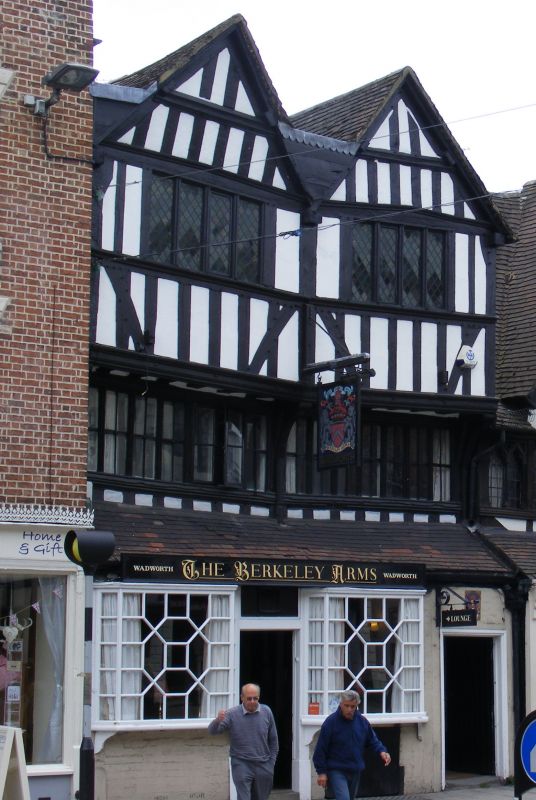 Hotel, with attached outbuilding, probably originally a
warehouse. Late C15 or early C16, with some c1600 (including
warehouse) and C18 alterations.
Close-studded timber-framing with mid rails and tension
bracing; plaster panels, some brickwork, tile roofs, brick
stacks.
PLAN: a double-depth twin-gabled right-angle plan street block
with central chimney breast, covering a throughway to the
right, with long back wing including a jettied section into an
alley, and an open warehouse with a 2-bay rear section in 2
floors, covering the alley.
EXTERIOR: front block in 3 storeys with basement, 2-windowed.
4-light ovolo-mullioned casements to the gables, with a
continuous run of 7+7-light casements at first floor, under
the jetty, and with moulded course above and below. All these
with leading.
The ground floor, formerly also jettied, has been brought
forward under a tiled pent roof. It has 2 square oriel display
windows with a central part-glazed door under a transom-light.
The oriels, on small shaped brackets, are small-paned, with a
geometrical pattern, and are probably mid C18. Under the
right-hand unit is a plank access hatch to the basement.
To the right is a C19 plank door in surround, giving access to
the throughway and an alley. On the ridge of the main roof,
behind the gables, a large square brick stack. In throughway a
C19 plank door with transom-light, in a square-panel framed
wall, at the back of which is a heavy beam on a bracket. At
the back eaves is a C20 brick stack, and there is a plain
square light to a dormer to the roof space.
In the alley is the heavy framed wall of the main building,
with a large 18-pane window, which rises above the ceiling
height of the ground floor, then a jetty above brick walling
with 2 doors to transom-lights, and various casements. The
rear gable of the main block is timber-framed, but faced with
a C20 gable wall.
The open outbuilding is separated from the alley by a 2m high
brick wall; to the right is the framing of the back wall to
Tudor Cottage (qv). At the beginning of the 2-storey
outbuilding unit is a large brick ridge stack. The covered
section of the alley has 3 transverse beams and heavy floor
joists visible, and heavy corner posts with brackets.
The back gable wall is mainly in C18 or earlier brickwork, but
with heavy cruck-like corner posts with remains of a tie-beam.
Above a collar is gable framing, and there is a bressumer
above the 5-light mullioned casement at the ground floor. A
small square loading opening is set centrally at first floor.
INTERIOR: the upper floor and roofspace were not accessible
for inspection. The basement, in 2 sections, has stone walls.
The rear section, beyond the chimney breast (also in stone)
has 2 deep transverse beams with stopped chamfers, and housed
chamfered floor joists. Ground-floor front has a corner post
with bracket to former jetty, and a transverse beam with ovolo
and hollow moulds. The rear room has rebuilt fireplace in a
C19 surround with a moulded post each side, carrying a
transverse moulded beam with hollows and small roll-mould to
flat soffit.
A straight flight C19 stair at the alley wall runs to a
corridor with plastered inset over the large window below. The
full-width front room has 4 heavy posts, and a central
transverse beam on heavy brackets, with heavy member
square-panel party walls. The ceiling joists are early. The
wing includes a heavy chamfered beam, and the back wall is in
heavy framing, with a jetty, and faced externally with brick.
The open warehouse is in 2 bays, with queen-post and collar
trusses on heavy cambered tie-beams to posts with brackets.
There are some heavy stone corbels in the outer walls.
One-purlin roof with light wind bracing, and rafters halved at
the ridge.
The enclosed 2-storey section at the outer end was not
inspected, but it encloses a large brick stack.
SR Jones (VCH) notes that both ground and first floors were
orginally lit by ranges of mullioned windows, and that rear
wing has a trimmed opening for a stair ladder to the second
floor.
This is one of a group of important early framed buildings at
the east end of Church Street, including Nos 9 & 10 (qv)
adjoining, and Nos 15 & 16 (qv), all retaining important
elements of original structure including a rare early example
of a warehouse-type structure.
(Victoria County History: Gloucestershire: London: 1968-:
128).