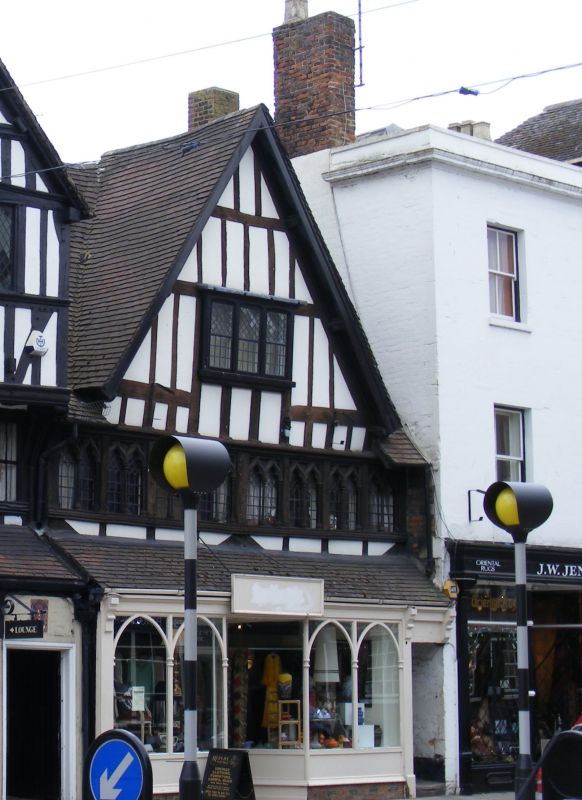 House in row, with shop. C14 or early C15, with C19 shop front
and important restoration work by Thomas Collins, late C19.
Stud framing with rails, braced box framing, tile roof.
PLAN: a cross-gabled block, with transverse roof-slope brought
down to eaves either side of broad single gable facing street.
2-room plan, carried over Lilley's Alley to the right, with
double jetty, but ground-floor shop front brought forward
under a tiled pent roof.
EXTERIOR: 3 storeys and basement. In the gable a large 3-light
casement with leading, in a surround with stopped chamfers to
each of the lights. Below the jetty is a continuous run of 8
small 2-light casements with leading, set to the studding,
behind a screen of ogee-headed openings with central slender
wood colonnette; the screen appears to be largely Collins'
restoration work, no doubt following the original detail.
The ground floor has a plate-glass shop front with deep
recessed central glazed door under a transom-light, all
beneath a pent roof which embraces the entry to Lilley's
Alley, with paired pilasters to the opening. The basement
lights have been covered in.
In the alley the partition to the left is square panel light
framing with brick fill. Beyond is an enclosing yard wall,
behind which is the framed wall of the main block; beyond is
Tudor Cottage (qv), a separate property.
INTERIOR: ground floor has been considerably altered to form a
continuous shop area, but the heavy post with bracket remains
at the front showing the position of the original first-floor
jetty.
A flight of brick steps gives access to the basement, with a
brick floor, a heavy chamfered central beam, and in the wall
to the street stone rebated and chamfered jambs, without head,
to a former doorway; this is a detail repeated in the adjacent
No.10 (qv), suggesting a common building date.
A tight wooden spiral stair rises to the first floor, where
the front parlour, formerly running the full width of the
front, above the alley, has been subdivided, with a small
kitchen which has C19 panelling and an C18 plank door with
early hinges. The parlour has heavy tension bracing to the
party wall, and the back room has 2 transverse beams and
square panel braced frame walls. There is no evidence of
original fireplaces. The spiral stair to the attics has an C18
panelled door, and there is a second very steep stair with
turned balusters and newel.
The front room adjoining No.8 has a chamfered wind-brace, and
pegged purlin, which has been modified to give access to the
window, and a central propped beam. The back room, with very
steep ceiling slopes, has a pair of braced principals and a
heavy chamfered purlin. There are some remnants of
lath-and-plaster walling.
This is one of a group of early framed buildings at the east
end of Church Street, including No.8 (Berkeley Arms), and Nos
10, 15 & 16 (qqv), all retaining important elements of
original structure. The facade is chiefly remarkable for its
row of ogee-headed window openings, some of which are original
and of early Gothic type: these represent a most important and
significant survival - Nos 82-3 Church Street (qv) have
retained later medieval fenestration. Thomas Collins,
Tewkesbury's "...first important conservator..." (VCH) was
responsible for the later C19 restoration of the building.
(Victoria County History: Gloucestershire: London: 1968-:
128).