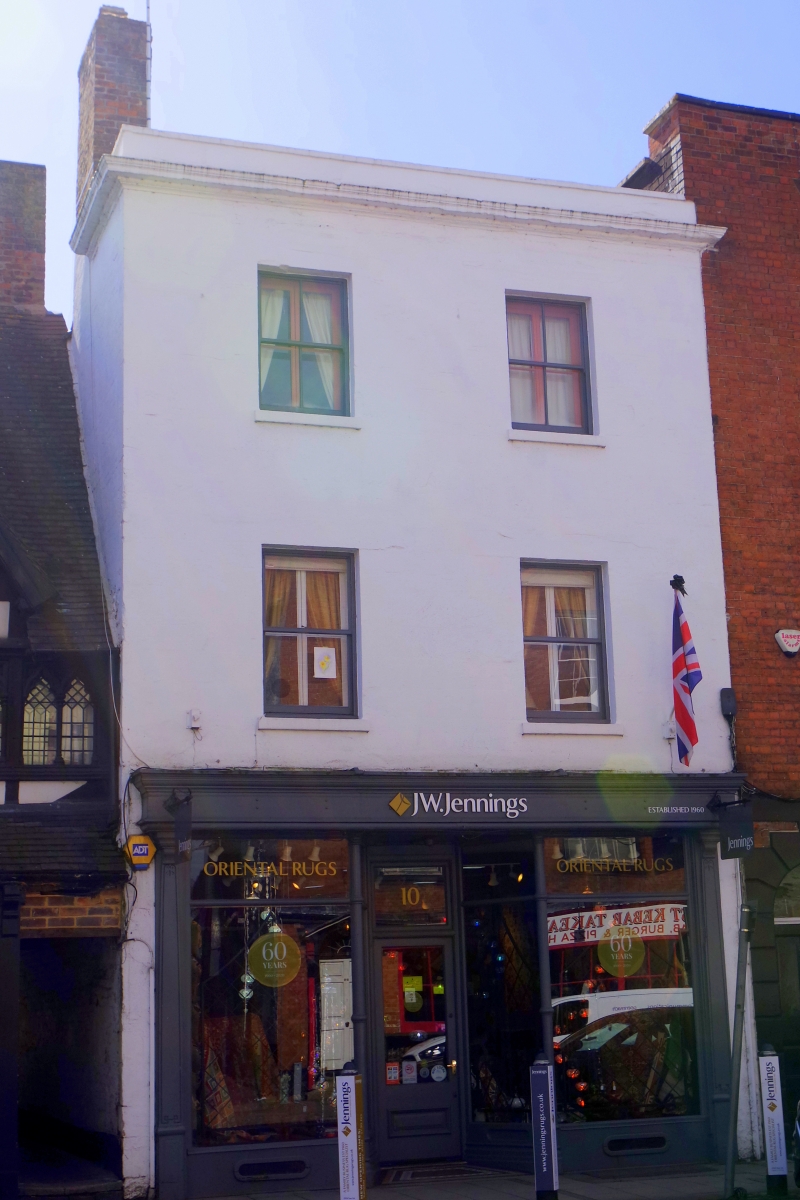 House in row, with shop. C14 or late C15, mid/late C18 front.
Timber-framing, some brickwork, rendered brick front, tile
roof, brick stacks.
PLAN: a long building in 3 parts; the front block is
double-depth with central chimney breast, and a further stack
to its rear gable. A lower staircase link connects with a
third unit, with lower ridge, a 2-storey house or warehouse,
with jetty at the street end. This block was probably
originally free-standing, and of the same date as the front
block: it was probably a back block functionally related to
the front range or a separate property altogether.
EXTERIOR: the street front is rendered, with a parapet, in 3
storeys and basement, 2-windowed. All 4-pane sashes to stone
cills. The late C19 plate-glass shop front has slender
pilasters, a shallow fascia and slight cornice; the central
door under a transom-light is well set back. A moulded main
cornice has returned ends, with a small blocking-course. The
party wall to the left is mainly in brickwork, and that to the
left is framed. The rear gable is in brick, above a very heavy
cambered tie-beam.
INTERIOR: not fully inspected - the upper floors of the front
block were not seen. The ground floor, opened to one space for
the shop, has substantial remains of C17 oak panelling in the
front part, whilst the rear half has 2 longitudinal beams; one
of these is chamfered and stopped, and the other, near the
left-hand party wall, is moulded and brattished, with the
moulding cut off for part of its length. This medieval beam
seems to have been inserted, probably from elsewhere in the
building when the shop front was added, and lies very close to
the wall. There is a large central chimney breast, with an C18
fire surround to the rear part, with fluted frieze with
dentils. This room also has a blocked doorway to the right,
with a 6-panel fielded door on the outer side, to the alley.
The stone-walled basement has in the wall to the street a
chamfered and rebated stone door jamb with hinges; similar to
one in No.9 (qv) adjoining, and suggests a common building
date. Various doors and panelling of the C17 and C18.
The link block contains an open-well C18 staircase with stick
balusters and turned Doric newels, to a solid string, and with
swept handrail. On one side is the external gable stack, and
on the other is visible the underside to the jettied end from
the early property, which has a floor level several steps
below that of the link unit.
The main upper room in this rear section has moulded ceiling
joists approx 160mm wide, with hollow-mould edge, and a small
rebate above, and beyond this, again at a lower level, is a
room with cruck-like supports to a heavy cambered tie beam,
carrying later queen-post framing above. This room has a
series of early rafters, all displaced at a common angle, and
with one range of wind-bracing to each slope. The lower floor
has stone flags, and a brick domed well, and, in the yard, a
1.5m diameter stone-lined well.
This is an important early survival, with a much later facade
which does not reveal the richness of the interior. It is one
of a group of early framed buildings at the east end of Church
Street, including No.8 (Berkeley House), and Nos 9, 15 & 16
(qqv), all retaining important elements of original structure.