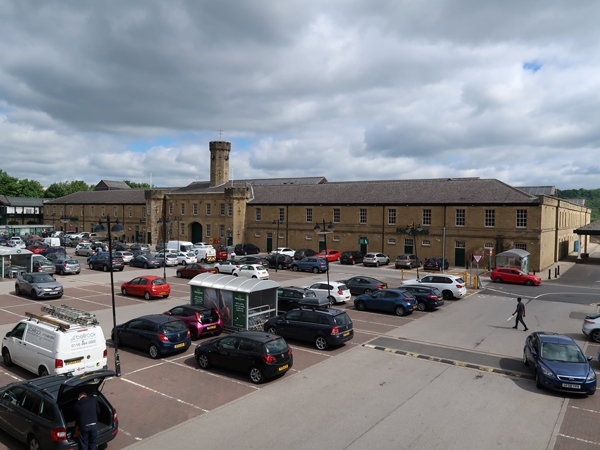 Stable block, now supermarket. 1848-54, used as industrial workshops mid C20, converted and altered 1990. Coursed squared stone with ashlar dressings and hipped slate roofs. Castellated Gothic Revival style. Rectangular plan, formerly with central parade ground. EXTERIOR: Plinth, first floor band and sillband, half -round moulded eaves. 2 storeys; 27 window range arranged 10: 7: 10. Windows are mainly late C20 glazing bar sashes. Projecting central entrance block has coped parapet and octagonal corner towers, and is topped with a taller octagonal clock tower. All the towers have crenellated parapets. 5 windows, and below, segment-arched carriage opening flanked by 2 windows. Corner towers have a single window above and a door below. Flanking ranges have 4 windows, then a loft door, then 4 more windows, then a loft door at the end of the block. Below, 6 doors alternating with 7 small segment-headed glazing bar stable windows. Rear elevation of similar design, with blocked central carriage opening. Right return has coped parapet and regular fenestration, mostly blank. INTERIOR: Not inspected. HISTOR y : Hillsborough was built in response to anxiety over civil unrest. The large stable area included fodder stores over the stables. This is one of the earliest examples of historicist, castellated barracks style, following the contextual example of the Tower of London (1845). Despite conversion, much of the original site survives, including the barracks, officers' quarters, hospital, riding
school, guard house and magazine (qqv) .(The Buildings of England: Pevsner N: Yorkshire: The West Riding: London: 1967-: 472; Skeleton record plan of ground floor: 1907-1923).