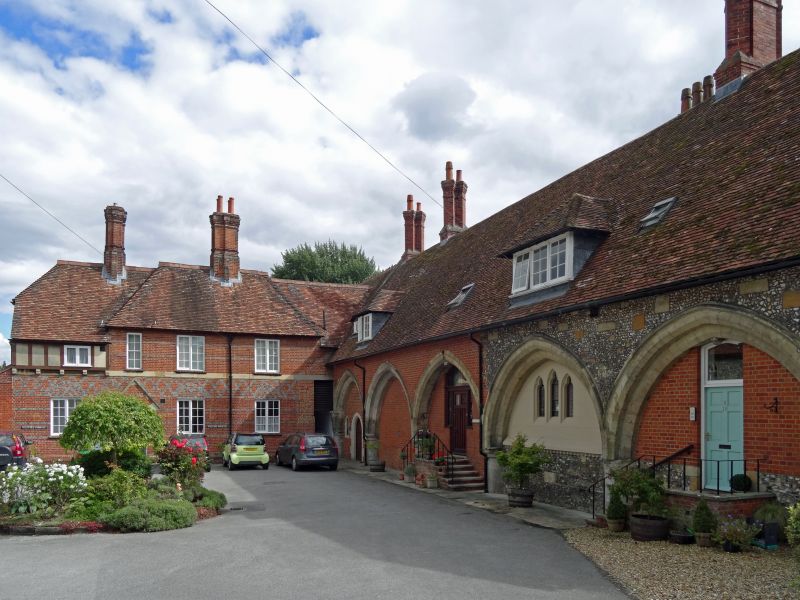 A group of almshouses, originally founded by Bishop Bingham as a hospital in the C13. Arranged in a three-sided courtyard, including material from two medieval ranges and a mid-C19 range, restored and added to by William Butterfield in 1854.

PLAN: the almshouses consist of two ranges set at right angles to the road, running east-west and a linking range to their east, which runs north-south. Buildings are of two storeys or one storey with attic.

EXTERIOR: the southern range (restored by G.R. Crickmay, 1884) has, to its north face, an arcade of five arches. These are supported by squat, circular piers and have moulded capitals. The double arches are chamfered. The surrounding walling is of flint with squared blocks of limestone at its west end and brick to the eastern end. The arches have been infilled with red brick and there is a low door with arched head at far left and C20 panelled doors approached by steps to two bays. At right of centre the bay has been infilled with flint and above this is a modern window of three clustered lancets set in ashlar walling. There are hipped dormer windows to the roof and C19 brick stacks with diagonal flues.

The eastern range is entirely C19 and of red brick with a stone band at the level of the first-floor casements. Between the floors is a band of blue brick diapering.

The north range is largely C19 work by Butterfield of flint rubble with ashlar dressings and a half-hipped tiled roof. The south front has two medieval doors with four-centred heads to the ground floor. Windows at ground-floor level are two-light casements and there are paired lancets with cusped heads to the first floor.

INTERIOR: the arches which are exposed on the north side of the southern range, are thought to have originally marked the middle of a large open ward, divided to house men and women on either side of a central screen, and with a separate chancel at the east end of each. Both chancels survive, but the northern side of the ward has been demolished, exposing the arcade. The interior of this oldest part has now been divided to provide the master's house, office space and individual flats for the residents. What was the south chancel has two lancets to the south and two to the east with a cusped octofoil in a circle above them. Of the north chancel two east lancets and a north lancet remain. Both chapels have a large piscina in the south wall with a trefoil head.

The origin of the hospital is unknown, but a charter of Richard Aucher, dated 1215, refers to the hospital as being already substantially established. Further gifts from Ela, Countess of Salisbury, wife of William Longspee, Earl of Salisbury, and Bishop Richard Poore are dated 1227. Substantial changes were made by Bishop Robert Bingham after 1229, sufficient for him to claim the role of founder. It is possible, for instance, that he rebuilt the hospital itself (royal grants of timber were made for the roof in 1231 and 1235), as most of the surviving medieval buildings date from the period of his episcopate. He also connected the hospital to his new two-part stone bridge (on which stood the chapel of St. John, later a chantry) over the River Avon, which proved of enormous importance to the growing, newly-resited, city of Salisbury; travellers may have enriched St. Nicholas's with gifts and alms.

Bingham ensured that a warden was appointed for the hospital in 1244, and declared that the purpose of the hospital was to receive, help and maintain the poor of Christ, the weak and the sick (debilies et infirmi). The hospital was apparently built in the form of a church, with a double hall divided down the centre by an arcade of seven arches, and opening into two chapels at the east end. The chapels remain, but the north aisle has gone. It is probable that the double hall served as a sick ward with the central aisle dividing the sexes, although another possibility is that one aisle may have been for the parochial use of the Hospital's tenants. An earlier hospital noted in 1227 as lying north of the new building may be incorporated in the complex as the North Building (restored 1860).

By 1478 statutes of Bishop Beauchamp reveal that St Nicholas's Hospital had become - like many small, and often increasingly impoverished hospitals - an almshouse, with a dozen brethren and sisters. Changes in the late Middle Ages are poorly documented, although in the early C18 it was claimed changes were made c.1498, and this may be when the north aisle of the hall was removed. The south aisle was converted into six rooms for the inmates, with rooms for the master and chaplain above, while the north chapel became a common hall. Other rooms may have lain in a north block.

The Hospital escaped dissolution under Edward VI, and was refounded in 161o with the bishop holding the right to appoint the warden. It continues as an almshouse to the present day. The complex was restored by William Butterfield and others between c.1850 and 1884.

As recounted in Anthony Trollope's own diary (for July 1852), when he encountered the Hospital he determined that its setting should provide the same for Hiram's Hospital, in his 'The Warden', which he was then writing. That said, around the time of his death in 1882 he identified the inspiration as Winchester's St. Cross Hospital.

St Nicholas’s Hospital is designated at Grade II* for the following principal reasons:
* Historic interest: the buildings are an important and rare medieval charitable hospital, arranged as two infirmary wards for men and women, each with their own eastern chapel which reflect the treatment of the infirm and disabled in the medieval period;
* Architectural interest: the southern range, in particular, shows the interesting plan form and ornament of the medieval hospital building, and the group, as restored by William Butterfield in the 1850s has considerable interest as a work by this widely-respected Victorian architect, which shows sensitivity towards the surviving medieval fabric;
* Intactness: a considerable quantity of the medieval material survives to clearly indicate the original plan form, and the C19 work by Butterfield has been little altered externally.