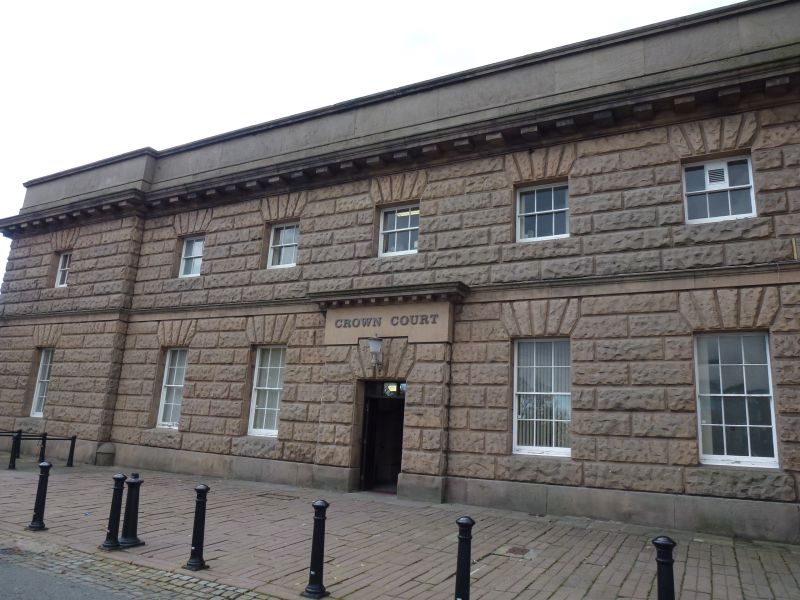 Court house block and offices. 1788-1801. By Thomas Harrison of Chester.
Keuper sandstone ashlar having slate roof with lead flashings. Set on a sloping
site the building has two storeys to the western front and four to the east.
E-shaped block. Facade facing Castle Square: 19 bays symmetrically disposed.
Projecting plinth, moulded string-course and cornice with modillion frieze and
plain attic above, all running around whole of building. Central projecting
portion of 7 bays of smooth ashlar, the ranges to either side being of rock-faced
rustication. Hexastyle Greek Doric portico with monolithic unfluted columns to
centre and second row of columns behind. Coffered ceiling above with rows of
½ mutules to sides of coffers. Plain tympanum and attic above with moulding to
top. Within the portico at ground floor level is a recession with three arched
niches with flat backs and lateral double doors with fanlights over at the level
of whose springing runs a string course. Similar double doors to near sides in
concave arched niches. To first floor above all ground floor portico bays are
square, slightly recessed, panels with moulded surrounds. To either side of the
portico are further double doors with rectangular fanlights over and moulded
door surrounds and hoods supported on fluted consoles. Wrought iron lamp
brackets immediately above and slightly recessed square panels with moulded
surrounds to first floor. Ranges of 5 symmetrically disposed bays to either
side. Central double doorways set in slight ground floor projections. Flat
head with splayed voussoirs above. Above these is a plain piece of ashlar
supporting a cornice with modillion frieze. Ground floor windows to either side
of these of 3 x 4 panes and first floor windows of 3 x 2 panes and with flat
heads and splayed voussoirs. To either side are slightly projecting single bays
with the same window arrangement. To either end are ground floor colonnades of
3 bays with unfluted monolithic Greek Doric columns in antis. The colonnade to
left is open to both front and rear, that to right was originally similar but
the building of the Nisi Prius Court by T M Lockwood in 1875 behind made it into
an entrance porch with ½-columns to the centre rear and ¼-antae to the corners
with double doors to the centre of 3 panels each. Plain entablature above.
Rear: 19 bays symmetrically disposed. Central bay of smooth ashlar, the
remainder of rock-faced rustication with ashlar dressings. Central three bays
project slightly with projecting semi-octagonal bay to centre. The lateral bays
also project slightly. The lower two floors form one continuous range, the
supper two floors, which are the rear of the Castle Square elevation, are flush
with the central three-bay and lateral one-bay projections but are otherwise
recessed forming two 3-sided courtyards. Ashlar bands run across the front at
the level of the ground floor door lintels and the first floor window sills.
Ashlar cornice and frieze at level of second floor roof extending across
projections as a string course. Central semi-octagonal bay has projecting
plinth. Blind doorways to centre of each face with lintels above and lunette
windows over. First floor windows have sunken panels below arched windows.
Second floor windows of Grand Jury Room have arched heads and sunken panels
below and band at level of springing of arches. Third floor paired sash windows
of 3 x 4 panes to each face with band extending across facade at level of sills.
All the windows have splayed voussoirs. The bays to either side of this central
feature and the projecting lateral bays are essentially similar and have cell
doors to ground floor with lunette windows above. First floor arched windows,
second floor arched windows recessed and set in ashlar surrounds. Single light
windows to second floor. Between these are the seven bay two-storey ranges with
cell doors to ground floor with lucarnes over. Lunette windows to first floor
also. Interior: Shire Hall, now Crown Court; Semi-circular in plan with
ambulatory screen of ten monolithic Ionic columns to curved side of room with
antae supporting entablature with plain ashlar frieze. Arched and rectangular
niches with aedicular surrounds to curved wall with rectangular sunken panels
above with moulded surrounds. Coffered ceiling to ambulatory and to semi-
circular dome with painted central panels and four late C19 skylights to outer
edge. Screen to centre of flat wall of two columns and antae with recess
behind originally forming the surround to the judges seat. (Seating plan now
reversed.) The plan is very similar to that of Harrison's Gothick Shire Hall at
Lancaster Castle of the 1790s and derives ultimately from Gondoin's Chirurgie in
the Ecole de Medecine Paris or Palladio's Teatro Olimpico at Vicenza. Two
barrel vaulted rooms to either side of Judge's recess with panelled ceilings and
lunette windows. Central Waiting Hall: Six plain niches to northern wall with
pilasters between supporting Doric entablature. Similar pilasters and frieze to
southern wall. Panelled ceiling with central skylight of clear, pink and yellow
glass decorated with anthemia. Number 2 Court (added by T M Lockwood in 1875 as
a Nisi Prius court room) pilasters to walls bearing Doric entablature. Blank
arches between coved wooden panelled ceiling with central rectangular skylight
containing coloured glass. Chapel: Segmental barrel vault to nave and semi-
octagonal chancel with ambulatory of four Tuscan columns with projecting bases.
Northern (ritual western) end now blocked off and galleries removed.

The two courtyards at the right and left of the building were originally
exercise yards for the male and female debtors respectively. The semi-octagonal
felons jail (now demolished) originally radiated from below the central bay with
the governor's house in the right hand wing. The jail was thus the first in
England to have been built on the overview principle advocated by John Howard in
his State of the Prisons of 1780 and later by Jeremy Bentham in his publication
Panopticon of 1791. Harrison also received direct advice as to planning from
the prison architect William Blackburn in 1784.

M Dupin said of the building that "The Sessions House and Panoptic prison of
Chester are united in the same building which is most assuredly the handsomest
of this kind that is to be seen in Europe. The interior arrangements are
well-contrived and bespeak much regard for humanity. The architecture is
equally simple and majestic". The Builder,( Vol 21, p.204.

The Assize Courts block, still little altered since Harrison's day, demonstrates
his international stature as a Neo-classical architect and his obsessive
perfectionism in the execution of a major commission.