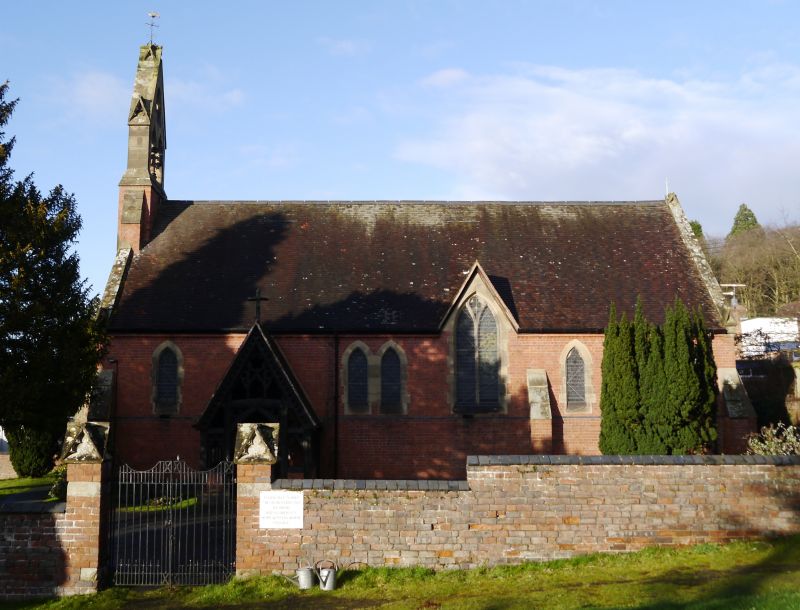 Church. 1880. By W.F. Hopkins. Brick with stone dressings and
plain tiled roof. Late C13 Gothic style. Nave with western
bellcote and chancel without structural division. Doorway in
ornately carved timber south porch, with traceried spandrels
and panels above the entrance arch. South door itself has
plain roll moulded stone arch. Blue brick plinth and sill band
to butressed south wall, stone dressings to windows, which are
lancets, arranged singly or paired, with plain trefoils to
nave, cusped to chancel. Taller window in gable marks the
junction of nave and chancel. Central buttress in west wall,
between paired lancet windows with quatrefoil heads, and
bellcote corbelled out on a stone arch with quatrefoil light.
Projecting coped gable in north wall with Decorated window.
Chancel roof sweeps over vestry to north. Decorated east
window. Interior is also exposed brick with blue brick bands
and stone dressings. Painted texts on dado band, and over
south doorway. Although there is no chancel arch, the
distinction between nave and chancel is marked by different
roof detailing: the basic roof structure is a series of
cross-braced trusses with wrought-iron ties, but in the
chancel, these have additional hammer beam supports, with
traceried panels and quatrefoils in the spandrels. The slope
of the roof between the trusses is also embellished with
quatrefoiled wind braces. Paired hammered coronae to chancel.
There is a complete scheme of glazing by Morris and Company,
installed between 1900-1925 in commemoration of the family of
Alfred Baldwin. The designs use earlier cartoons by Sir Edward
Burne Jones, Ford Maddox Brown and William Morris. South and
north lancets lights each contain a single figure (saints and
virtues), set against a foliate ground. East window has Christ
with children in central light, flanked by St George and St
Martin, with small narrative scenes of angels below. West
window has angels playing musical instruments. The church was
endowed by Alfred Baldwin, whose wife was the sister of Lady
Burne Jones.
(The Buildings of England: Pevsner; Sewter: Catalogue of Glass
by Burne Jones: 1975-: 203-4).