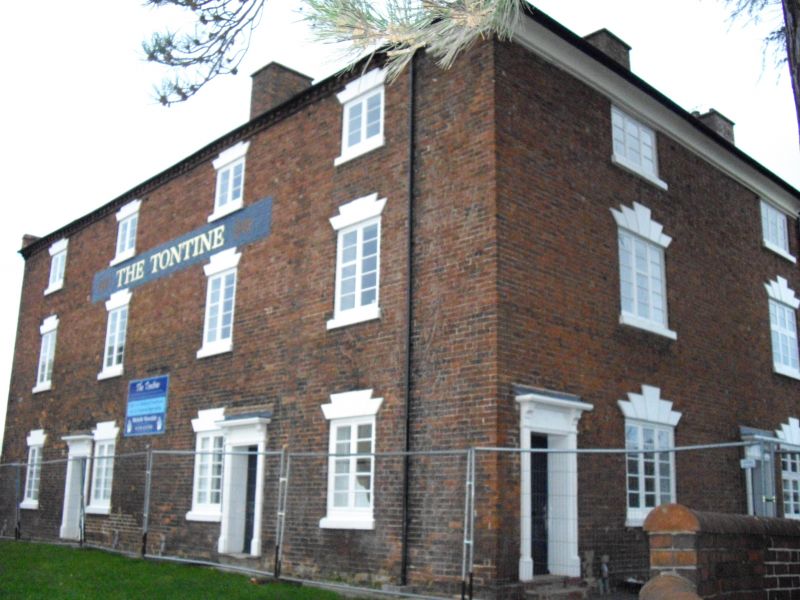 II*
Former canal hotel and lodgings, now disused. c.1772, by the Staffordshire and Worcestershire Canal Company possibly by Thomas Dadford, company Engineer.
MATERIALS & PLAN: Red brick with Welsh slate roofs to a three storey, E-shaped plan, with three wings to the rear.
EXTERIOR: The main elevation (south west) is of seven bays, with a central doorway located in a gabled brick porch, added c.1870. The porch is flanked by Palladian windows with stuccoed heads, with channelled voussoirs and keystones. The outer bays comprise two paired doors and windows, giving access to originally separate lodgings. The side elevations each contain two additional units, each of a single bay. All the doorways have six-panelled doors in wooden architraves, with fluted shafts and console brackets to the entablature. The windows throughout are three-light casements with stuccoed flat arched heads, with channelled voussoirs. There is a stuccoed eaves band to the front elevation and dentils to the side and rear. Symmetrical axial chimney stacks are arranged two to left and right and one on each wing. The later flat roofed infill extensions between the rear wings are of no architectural significance.
INTERIOR: A variety of original features remain intact. All the original casement windows remain, with moulded mullions and lambs tongue glazing bars, many with original shutters intact. On the ground floor, original black and red chequerboard quarry tiles remain. Despite repairs, including re-laying the roof, the majority of the original roof structure remains with the addition of later rafters and steel tie rods, although the ceiling of the second floor was removed during roof repairs. The internal partition walls survive to full height. The majority of internal fittings, such as the timber panelled doors, some with over-lights with elliptical glazing bars, the skirting boards and the original dogs-leg staircases survive in the lodgings. In addition some particularly good features, including the glass cupboard with niche head and doors with shaped shelves, and the splat baluster handrail to the upper staircase, remain in lodging number two. Many of the original fireplaces are in situ, including original eared architrave fire surrounds and ducks-nest gratings. Some of the cast iron fireplaces include the insignia of the Staffordshire and Worcestershire Canal Company. On the ground floor, despite the alterations within the former hotel premises, during conversion to a public bar, the original ground plan can still be traced and the high quality staircase survives with pairs of turned column and vase balusters with carved tread ends, and a ramped and swept handrail; matching ramped and swept dado rail and panelling in the stairwell. On the first floor the original layout of the canal company boardroom, which was also used as a ballroom, survives, as well as other offices. In the cellars there are a series of barrel vaulted brick arches some with access to chutes for the delivery of goods. There are also several brick fireplaces with cooking ranges and water boiling facilities, including coppers, and a number of brick built tanks relating to a rain water collection system providing fresh water for domestic consumption.

HISTORY: The Tontine Hotel, originally known as the Areley Inn, was constructed for the Staffordshire and Worcestershire Canal Company in 1772 as a centrepiece to their enterprise at Stourport The development of the canal basins and settlement at Stourport began between 1768-1771 with the construction of the Staffordshire and Worcestershire canal, engineered by James Brindley. With a terminus at Stourport, the canal provided a direct navigable route via the River Severn between Bristol and Britain's industrial heartlands in the Midlands. The requirement for the provision of commercial accommodation to cater for the businessmen, travellers and workers which followed the development of transport networks reached its heyday in the well-known grand railway hotels of the C19. The Tontine is the first expression of this close association between transport networks and the provision of services to cater for those using them and served as a precedent for the development of transport hotels. The design of the building may be attributable to Thomas Dadford, the canal company engineer. The interior underwent alterations in c1810 and further subdivision occurred in the mid c19, more change took place in the 1970s.

SUMMARY OF IMPORTANCE
The Tontine Hotel was built in 1772 possibly to the designs of Thomas Dadford to provide lodgings and premises for the Staffordshire and Worcestershire Canal Company at their newly established depot at Stourbridge. Commercial buildings of pre 1840 date are uncommon: this is an exceptionally rare building, being a very early purpose built lodgings house with a strong canal connection. The special interest principally consists of its historical rarity; its association with the canal context; its architectural form; the survival of its original plan-form and interior fixtures. The infilled additions between the wings to the rear are not regarded as of special interest.