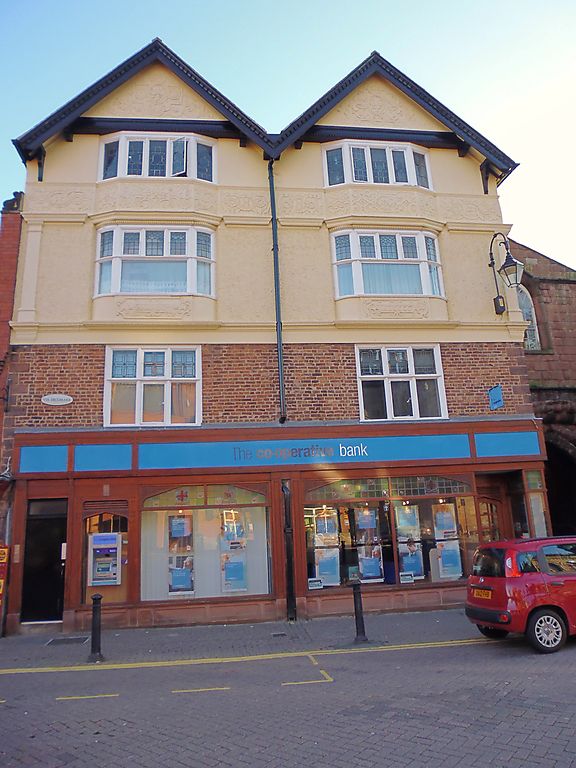 2 town houses, probably with shops, now one shop with storage.
Late C17 and early C18, but possibly earlier elements; the
upper storeys re-cased 1900. English garden wall bond brown
brickwork, sandstone, pebbledash, plaster and pargeting to the
third and fourth storeys, green slate roof with 2 gables to
the front.
EXTERIOR: full cellars and 4 storeys. Shopfronts of c1900 have
wood frames, leaded glazing above the transom with the City
Arms of Durham, Salisbury, Newcastle, London, Chester,
Carlisle and York; the windows have arched heads with art
nouveau motifs carved in the spandrels; modern fascias. The
second storey, of brick with flush red sandstone quoins, has 2
mullioned and transomed wood windows to the street and one to
the south end, with shaped leaded glazing above the transoms;
a frieze and cornice at third storey floor level; pilasters at
north end and south-west corner; 2 canted oriels to the street
and one to the south end rise through the third and fourth
storeys; pargeted panels beneath the third storey windows to
the street are inscribed ANNO DOM:MDCCCC. the south-facing
window has a strapwork panel; there is a continuous pargeted
band between the heads of the third storey windows and the
fourth storey sills; pargeted gables on jettied collar beams
above the oriels; bargeboards with moulded cornices; old brick
chimney on south gable and on ridge to north; red clay ridge
tiles.
INTERIOR: the cellars to both former houses have walls of
bedrock and sandstone, with some brickwork, the bases of the
chimneys and 3 chamfered oak beams to each cellar, parallel
with the street. No features of special interest are exposed
to view in the first storey; an inserted stair against the
north party wall from the street to the second storey. The
front rooms in the second storey of both houses have 2 painted
chamfered beams, stopped at their inner ends; the party wall
between the former houses is 18 inches thick; all main rooms
had corner fireplaces, some now blocked. No.56 has an oak
dogleg stair from second to fourth storey with square newels
and 2 stout barleysugar balusters per step; a similar stair in
No.54 remains only between storeys 3 and 4; there is an oak
cupboard with large door panels in a rear room of the second
storey, and 2 flush 12-pane sashes to the enclosed rear

light-well, one with thick quadrant-moulded glazing bars of
early type. The roof structure appears to date from 1900, but
the form of the building was little changed; the architect is
mentioned but not named in the City Council Improvement
Committee Minutes.
(Improvement Committee Minutes: Chester City Council:
27/9/1899 & 10/01/1900; Blomfield AW: Miscellaneous Views of
Chester - Engraving: Holborn, London: 1875-).