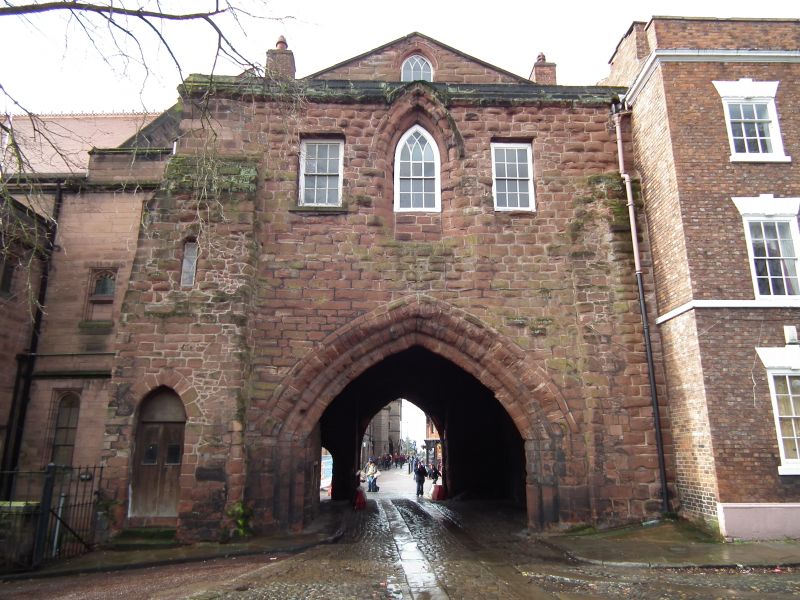 Gatehouse. c1300, altered c1800. Red coursed sandstone with
grey slate roof having gables to front and rear; the Gateway
formed the main access to the precinct of St Werburgh's Abbey,
now Abbey Square.
EXTERIOR: the face to Northgate Street has a full-width deep
segmental relieving arch, containing a central 2-centre
vehicular archway and a pedestrian archway, south, both with
double hollow chamfers; an empty broad niche to each side of
the vehicular arch; a plain rebuilt buttress at the south-west
corner; a moulded stringcourse at upper storey floor level;
upper storey rebuilt c1800; the central Gothick sash has
intersecting tracery in an arched moulded opening; a coved
stringcourse at the base of the plainly coped shallow gable.
The face to Abbey Square has a broader vehicular archway with
eroded triple hollow chamfers. A diminishing square turret at
the south-east corner has a boarded pair of doors in an arched
doorway with a small stair-window above; an eroded flat
buttress at the north-east corner; a central Gothick sash
above the archway in an eroded moulded 2-centre arched
medieval opening; a recessed 12-pane window with sash-boxes
exposed, to each side; a Gothick fixed-light window to the
attic in the recessed gable.
INTERIOR: the 3-bay vault to the archway has hollow-chamfered
diagonal and ridge ribs. The stone stair against the south
wall is probably c1800. The front room above the arch,
evidently formerly a robing room, has ranges of cupboards with
fielded panels to doors, built against 2 walls; the panel to
the upper cupboard above the doorway has an armorial painting
inscribed EDMUND CHESTER; the armorial panel immediately north
of the doorway is inscribed SAMUEL PEPLOE LLB, Chancellor. The
painter was probably of the Randle Holmes family. There are no
visible features of special interest in the rear upper rooms
or the attic. Compare the hollow chamfers with the vault of
the undercroft at Nos 28 and 34 Eastgate Street (Brown's of
Chester) (qv).
(The Buildings of England: Pevsner N & Hubbard F: Cheshire:
Harmondsworth: 1971-).