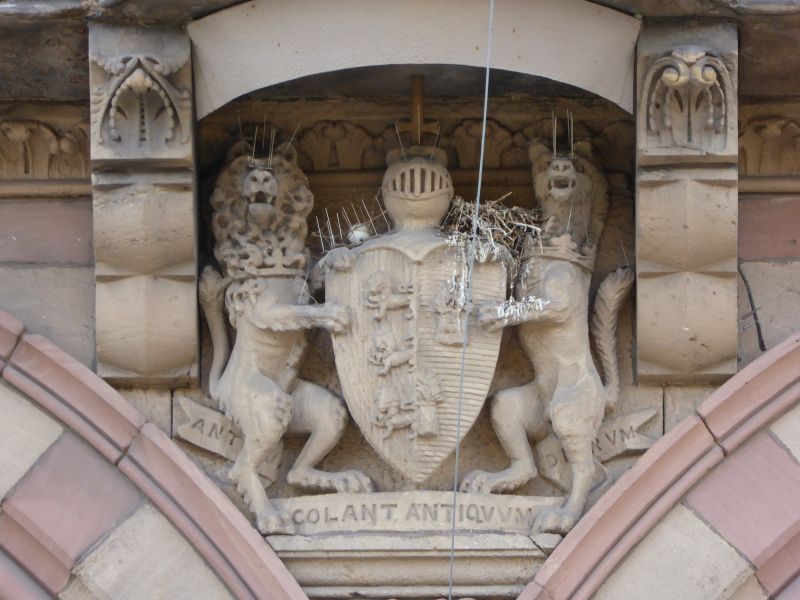 Town hall. 1865-69. By WH Lynn of Lanyon Lynn and Lanyon of
Belfast. Council chamber gutted by fire in 1897 and redesigned
internally by TM Lockwood 1898. Banded pink and buff
sandstone; graded grey-green slate roof.
EXTERIOR: semi-basement, 2 main storeys and dormer attic. Of
C13 French influence, the front is symmetrical with a 160 foot
helm spire. Opposed flights of steps with a pierced parapet in
front of the plain semi-basement lead to a central landing
before the porch which is recessed behind a pair of arches
with a polished stone central column. The semi-basement,
formerly largely occupied by courtroom, cells and police
station, has rectangular windows; a secondary entrance near
the south end has a recessed segmental-arched surround. The
semi-basement, treated as a plinth, has a cap-moulding at the
floor level of the first main storey which has 4 pairs of
arched windows with colonnettes and plate tracery south of the
slightly-projecting entrance bay, and 2 similar pairs and 2
single arched windows north of the entrance; a moulded
stringcourse at sill level; between the entrance arches the
date 1869 and the pre-1974 Chester City arms are carved.
The second main storey has an ornate stringcourse carried
across a projecting central balcony on 3 pairs of shaped
brackets, with stone balustrade. 2 pairs of arched French
windows to the balcony are separated by a central pier with 4
colonnettes; there is a colonnette before the meeting-stiles
of each pair of doors; shafts at each end of the entrance-bay
rise from balcony to eaves; 4 pairs of arched windows to each
side of the entrance-bay have colonnettes, plate tracery,
recessed circlets with shields on quatrefoils beneath the
windows and larger circular cartouches above each pair of
windows; the windows to the Council Chamber, north, have
leaded lights; a tourelle at each corner; an ornate
stringcourse and cornice beneath the parapet balustrade is
carried across a balustraded balcony at the base of the tower.
The first stage of the tower has 2 pairs of French doors to
the balcony, with colonnettes and tracery; 3 hipped dormers
with ornate finials in the roof to each side of the tower;

cast-iron cresting in roofs; ornate stringcourse to base of
second stage of tower; triple bell-openings have boarded
louvres and a gabled niche to each side; a corbelled
stringcourse above; the plate tracery of a circular window in
each gable of the helm spire serves as a clock-face; corner
pinnacles have niches and crockets; a steep-roofed hipped
dormer on each face of the spire has boarded louvres and an
ornate finial; the spire terminates in a balconied belvedere
with a steep pyramidal roof.
The north side to Princess Street is asymmetric with an
octagonal stair turret, the top stage expressed as a belfry
with a small spire, at the junction of the principal block
with the lower rear wing.
There are entrances to the magistrates court and the former
police station, now the City Record Office; the latter has the
lantern of its former blue lamp. The elements of fenestration,
string-courses and ornament are similar to those described for
the front, but the 3 pairs of arched windows to the Council
Chamber in the second main storey have shaped leaded glazing,
unlike the plain glass of other windows, probably designed by
Lockwood and inserted in 1898. The south side and rear are
largely concealed by the Forum development of the 1960s.
INTERIOR: the central axis comprises the recessed porch, the
stair hall with a cross passage to each of the 2 main storeys
of the Council Suite, the waiting hall with doors to the
parallel Assembly Hall, south, and the Magistrates, formerly
Quarter-Sessions, Court, north, and to a rear cross passage
enclosed in 1886 at its west end.
The central cluster of 4 polished granite columns in the porch
bear a groined vault of red sandstone; 4 panels of cream
freestone by a "sculptor of repute" apparently selected by
Lynn depict Roman Soldiers Building the Walls of Deva, King
Egbert Uniting the Kingdom of Mercia, Hugh Lupus created Earl
of Chester (by William I) and The Entry of Charles I into
Chester. The flagged stair hall has a groined vault with the
passage to each side barrel vaulted in painted brick; panelled
doors of pine. The divided stair of stone curves in to a
landing which bridges the hall, with an apsidal arcade behind;
the drum of the stairwell has full-length pictures painted in
1578, bought from Sir TSM Stanley of Hoole by Sir T Gibbons
Frost in 1883 and presented to the City; a memorial presented
by the Polish Air Force, stationed at Sealand, in 1944; eight
stained glass windows in the arcaded clerestory by RB
Edmondson of Manchester depict Gherbod the Fleming who
declined the Earldom of Chester to return to Flanders and the
7 Norman Earls of Chester; a straight stone stair leads from
the landing to the waiting hall which has double doors to the
Court, the Assembly Hall and the rear passage, a war memorial

bearing 768 names erected by Sir John Meadows Frost, Mayor
1913-19, four sculpted panels depicting Minstrels Marching to
Relieve Earl Randolph (at Rhuddlan), Black Prince granting
Charter to Citizens, Henry VII Constituting Chester a County
and Sir W Brereton (a Parliamentarian) before the Mayor's
(Royalist) Court; the walls are panelled to a dado at lintel
level; a circular window in west gable depicts the Common Seal
of Chester City; clerestory windows in north wall; a wagon
roof.
The Court is panelled to the dado rail and has probably
original furnishing, a low west gallery, a round-arched recess
behind the Bench, with a broad door of 9 panels to each side,
the upper 6 panels having leaded glazing, a double door to the
waiting hall and the rear passage; 3 trusses support the roof,
which has a coved lantern with 2 large roof-lights with leaded
glazing.
The Assembly Hall is panelled to the dado rail at lintel
level; the east end has an apsidal raised orchestra stage; a
circular window of stained glass in the west gable has plate
tracery; the roof trusses are largely hidden by a ceiling
inserted later C20. The upper landing from the stair hall has
a pointed arch of red sandstone to the passage at each side;
above the door to the central front room, the Mayor's Parlour,
a sculpted panel depicts Edward Prince of Wales receiving
homage, First Royal Earl of Chester A.D.1252; arch-braced
trusses support the boarded roof over the landing and the apse
of the stair-well; the passage to each side of the landing has
a timber ceiling with joists exposed; above the door of the
south room a sculpted panel depicts James the Second welcomed
by the Citizens and Nobility; above the door to the Council
Chamber, north, the panel depicts Charter granted to Mayor and
Corporation by Randolph the Third, A.D.1181. The Member's
Room, south-east, has a boarded roof on trusses; No.1
Committee Room, north of centre, has wall panelling and beams
on brackets.
The Council Chamber by TM Lockwood is an enclave of the
Jacobean Revival in a High-Gothic Hotel de Ville, with oak
panelling, Corinthian pilasters to the west gallery which has
access from Princess Street via the stair turret, 2 stone
fireplaces with putti serving as atlantes to support the
mantels and carved oak overmantels bearing the arms of the
Earl of Chester and the pre-1974 arms of the City of Chester;
the carved dado rail is at door lintel level; the ceiling has
a deep plaster frieze moulded with a pattern of foliage,
figures and cartouches, a large coved cornice, panels of
plaster on four oak trusses with carved brackets resting on
good sandstone corbels in the form of birds; 4 ornate
chandeliers; beneath the gallery is inscribed B.C. ROBERTS,

MAYOR 1896-7: J.F.LOWE, SHERIFF: THE COUNCIL CHAMBER RESTORED
AFTER THE FIRE ON THE 27TH MARCH, 1897, AND, WITH OTHER
IMPROVEMENTS, COMPLETED IN 1898: J.G.HOLMES, MAYOR 1897-8:
J.W.HUKE, SHERIFF.
The composition of the Town Hall, with its tall helm spire,
provides a satisfying focal point in the townscape; the stair
hall and the Council Chamber are pleasing features of a good
and little altered interior.
(Town Hall Committee Minutes: Chester City Council: MB 1860;
Chester City Council and City Record Office: From Moot Hall to
Town Hall: Chester: PASSIM).