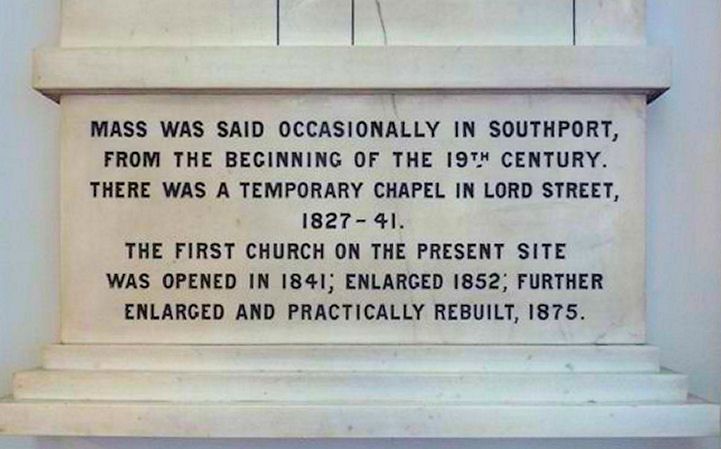 Roman Catholic church. Originally 1841, by Augustus Welby Northmore
Pugin, enlarged 1852, rebuilt 1875, facade rebuilt in replica
1924. Portland stone facade with sandstone dressings, steeply-
pitched 3-span roofs
STYLE: Decorated.
PLAN: nave on north-east/south-west axis with side aisles
under parallel roofs, 3-sided apse. Facade of 3 unequal
gables.
EXTERIOR: the gable of the nave has a full-width projected
rectangular porch with a statue in a niche flanked by gabled
entrances with 2-centred arched doorways, a pair of flying
buttresses rising from the sides of the porch, under the left
of these a semicircular vice with semi-conical roof, 3 unequal
lancets between the buttresses, that in the centre shorter to
allow for a rose window above, and a gabled bellcote.
The flanking gables of the aisles, which are smaller, each
have a 2-centred arched 3-light window with tracery. At the
sides the aisles have 2-centred arched 2-light windows and the
nave has segmental-pointed 2-light clerestory windows.
INTERIOR: 7-bay aisle arcades of quatrefoil columns carrying
2-centred double-chamfered arches; collar-truss roof with
king-struts, angle-struts and long straight braces from the
wall posts; 5-sided organ and choir gallery at west end,
supported on cast-iron columns; sanctuary with elaborate
carved reredos.