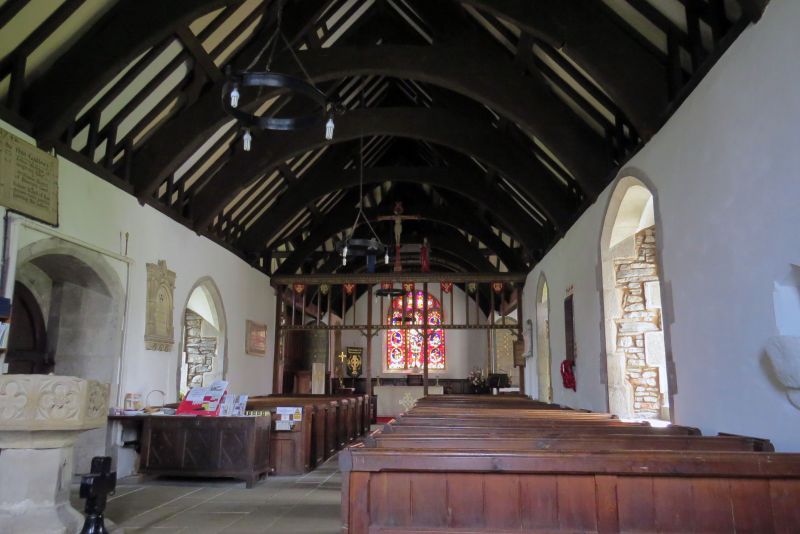 Location: The parish church stands S of the centre of a roughly oval-shaped churchyard on the S side of Llangernyw village centre. The churchyard is entered through a lychgate at W.

Medieval church substantially restored in C19. The cruciform plan is unusual for the region; the transepts and E arm may represent a late medieval enlargement of an earlier single cell church. The S door, formerly the principal entrance to the church, is C15 and the stoup set into the wall beside it is probably earlier. The roof is early C16. Work was carried out by one of the Pensons (presumably RK Penson) in 1849; the S door was reopened in 1881 to provide access to the vestry. The present vestry was built in 1898. Markets and fairs were customarily held in the churchyard until 1750.

Late medieval church, cruciform in shape, with shallow N and S transepts and similarly proportioned chancel to E. Added N porch and S vestry adjoining nave. Built of local random rubble masonry with chamfered sandstone plinth, sandstone dressings and ashlar bellcote. Welsh slate roofs with crested clayware ridges. W end of nave has splayed buttresses of squared coursed rubble and sandstone kneelers; a central buttress of similar construction rises in three stages to the top of the W wall. The gabled bellcote with apex crucifix and single bell in a cusped lancet opening stands over the W wall. Gables to the nave, chancel, transepts and porch have tabled copings, kneelers carved with gablets and apex crucifixes. Chancel E end has a 3-light Perpendicular style window with round arch and hollow chamfered mullions and single-light cinquefoil-headed side windows to N and S, all of the C19. Nave has C19 2-light windows with two-centred arches and geometrical tracery to N and S and two cusped lancet windows at the W end. N transept has a C19 4-light window with two-centred arch and curvilinear tracery. S transept window of similar size and shape has geometrical tracery. W wall of each transept has a 2-light window with two-centred arch and geometrical tracery of the C19; also small square blocked windows which are possibly C16.

Late C16 open rafter roof with arch-braced collar trusses and cusped windbraces. Plastered walls with exposed stonework in splayed window embrasures. C15 S door opens into vestry; a roughly carved stone stoup is set into the wall E of the doorway. C19 stone flagged floor in chancel and aisles; wooden boarded floors beneath pews in nave and transepts. Chancel floor raised by one step. Gated altar rail with splat balusters, panelled posts and moulded capping of the C17. Raised and fielded panelled dado of the C18 in chancel. The C19 reredos is carved in wood with blind rectilinear tracery. C19 organ by Bishop and Son, London in N Transept. Perpendicular style rood screen carved in wood with some painted decoration dated 1938. Medieval font has an octagonal bowl and plinth; five faces of the bowl have carved Tudor-flower ornaments within sunk quatrefoils in circles in squares. Another face has the mask of a dog or beast set within similar sunk tracery. Some of the carving is incomplete. The plinth has trefoil headed sunk panels on five faces; the remaining three faces are uncarved.

Monuments: five C17 tombstones set into walls at W end of nave with a further two and one C18 tombstone in the N wall of N transept to members of the Lloyd (Hafodunos) and Salusbury (Bryn Barcut) families. In S transept, a fine white marble portrait medallion in large framed plaque with pointed head to Samuel Sandbach d.1851 and wife Elizabeth d.1859. Said to have been carved by Smith, a deputy of the sculptor John Gibson. Three late C19-early C20 commemorative marble wall plaques in nave.

Miscellaneous: an C18 painted benefaction board hangs by the N door and bears an inscription recording a contribution 'to this Gallery' dated 1748. Two late C19 or early C20 metal plaques with round heads, painted stencil decoration and Welsh inscriptions in gothic script hang on the E walls of the transepts, either side of the chancel.

Included as a medieval church with unusual cruciform plan form for the region and which, despite C19 restoration, retains good and extensive early detail and construction - in particular the fine post-medieval nave/chancel roof.