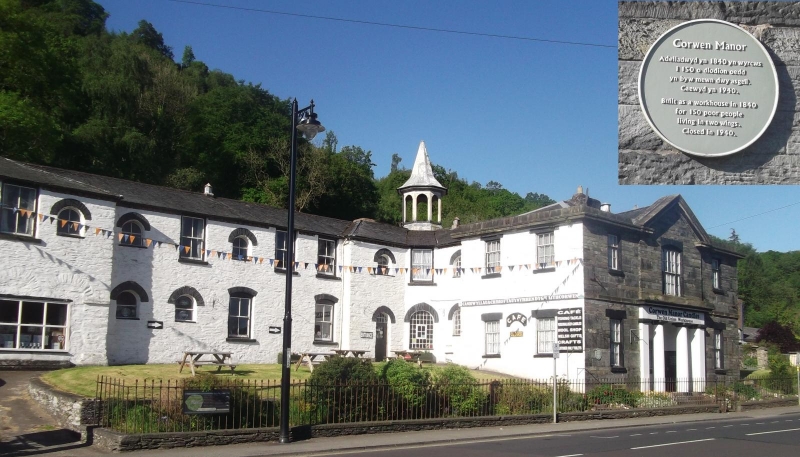 Location: A dominant feature of the approach to the town from the E.

Commissioned as a workhouse in 1837, and originally housing 150 paupers. The building was partly remodelled c1900, when many of the original windows, considered out of keeping with the more enlightened approach of the time, were replaced with larger ones. It closed in 1941, and was subsequently used as a factory. It is now a craft centre and guest house.

The workhouse is laid out on Benthamite principles, with a central octagonal top-lit tower and 4 radial wings. Mainly roughly coursed rubble (limewashed to front elevations) with slate roofs; the main gable facing the street is of well-coursed stone with ashlar dressings including continuous string course. Principal entrance is in this gable in pedimented and slightly advanced central section: Doric portico in antis, the doorway flanked by 9-pane sash windows. 9 and 12-pane sash windows to either side of the pediment which has tripartite window in its upper storey. Similar sash windows in return elevations of this block. The longest wings run E and W of the central octagon, which is expressed externally by slayed walls across each of the 4 angles between the radial wings. These walls have wide segmentally arched cast-iron small-paned windows (some later replaced by 4-pane sashes) on each floor. The central octagon is surmounted by a glazed lantern and a high wooden cupola. Each of the long wings terminates in a slightly advanced hipped roofed pavilion: these were originally 3-window ranges, and some of the original round-arched windows with cast iron fixed lights survive, though most were later replaced by wider 4-pane sashes. At the inner angle of the wings and the central octagon on each side, the wing is stepped out slightly and contains a round-arched doorway with cast iron glazing to the overlight. Each side of rear wing has paired 4-pane sash windows to ground floor and doorway with round-arched overlight in re-entrant angle; some original window openings survive, but many have been replaced by wider windows.

Original layout survives in part, and original detail includes a divided staircase in the entrance block with cast-iron balusters and swept rail. The large rooms on each floor in the E wing may be the former workrooms, with accommodation mainly in the W wing, where smaller rooms open from a central corridor.

A fine example of an early C19 workhouse in which the plan form is a clear expression of the original use, and which survives largely intact.