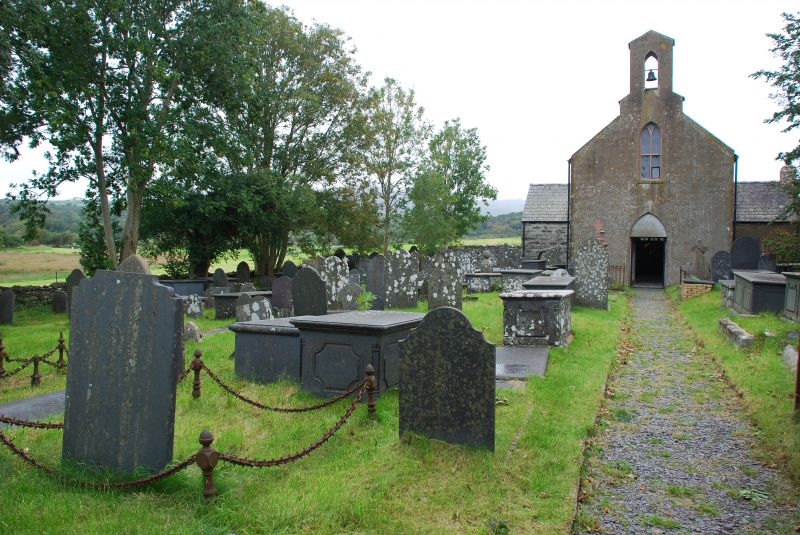 Location: The church stands alone on the former island in Llyn Ystumllyn, approx 900m S of Pentrefelin, and is reached by a track from the village.

The church, which is the original parish church for the early settlement at Portmadoc, is said by RCAHM to have a C12 nave, with added C16 north transept, and a south transept added in 1622. In character the building is now largely of the early C19.

Walls of rubble masonry of long flat stones, the nave and E chancel wall rendered. Modern slate roof. Short nave, N and S transepts, the roofs pitched below the nave eaves, and small chancel. Entrance by the W door, a simple pointed arch and a pair of framed and battened doors. Tall 2-light transomed windows in timber to the nave, including to the W gallery, and transepts, but 3 lancets at the E end. Stepped W bellcote.

Interior is plain, of a distinctive early C19 character, with the walls plastered above the timber dado, but is said to have 3 medieval arch-braced trusses behind the present C19 segmental plaster vault. Stone flagged floor, but an unusual painted decorative floor in the sanctuary.

Fittings: a good range of early C19 fittings. Font, limestone, an octagonal pillar erected 1900 by Robert Isaac Jones. Three-decker pulpit of 1832, the pulpit at the top octagonal, approached by 9 steps, set against an architraved and corniced backboard. Lectern below, with reading shelf, and reader's desk at the lowest stage. Box pews either side of the Altar, which is raised 1 step, behind the oak sanctuary rail on iron stanchions. Tall skeletal pews in the nave, named on their ends, and 6 rows of tiered pews in the N transept. Western gallery erected in 1832 under Rev John Jones, supported on slender quadruple shafted columns, with dentilled cornice and panelled front. This is approached by a winding stair at the back of the nave. Six steeply raked pews either side of the organ, which is also of c1830 with a fine Gothic case.

Included at Grade II* as a building of special interest partly for its surviving medieval fabric, but principally for retaining its character from an early C19 pre-Ecclesiological restoration, including contemporary gallery and fittings.