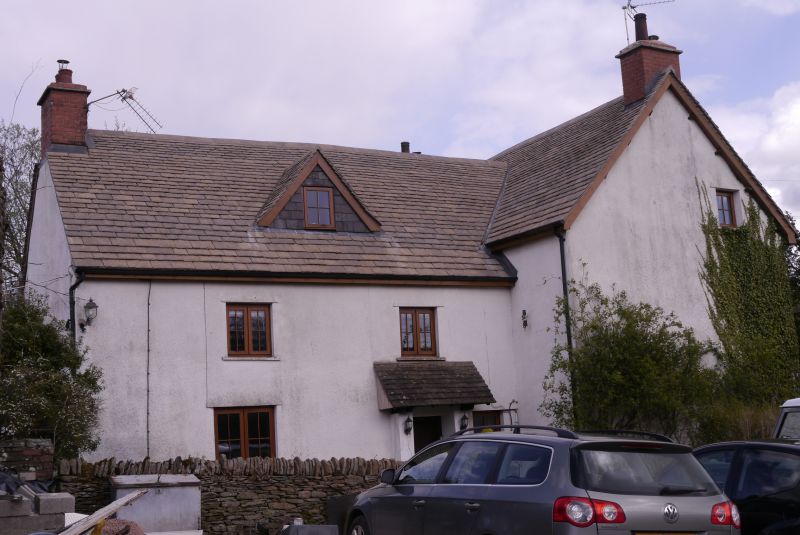 Location: On a platform site to NE of Mynydd Dimlaith and above Cwm-y-bwch to SE. Reached N along an irregular track from cross roads at Pandy Mawr, about 1 km W of Bedwas Parish Church.

Partly a sub-medieval gentry house belonging historically to the well-known Davies family of Gelli-Groes (Mynyddislwyn) and Ty-Isaf (formerly Ty-isha). Shown on the 1841 Tithe Map in its present form.
The house was modernised, presumably including the addition of the big S range, by the well-known Dr Joseph Davies (1793-1873), who kept a famous pack of Welsh hounds. Dr Davies' life is celebrated in the Welsh poems of Gwilym Ilyd and he was an active JP as well as living a humane life as " the baron of Bedwas". Dr William Price of Llantrisant attended him when Dr Davies died suddenly near Newport railway station. He is commemorated on a wall monument behind the pulpit in Bedwas Church.

The interior shows clear evidence for the building of Ty-isaf in two main phases: the older building is the lower entrance block which retains sub-medieval detailing and an external battered S wall, now flanking the later main staircase which lies directly in line with the present entrance. Painted timber handrail with turned balusters in C18 style but very widely spaced. Original ground-floor room to left has chamfered beams with broach stops and stop-chamfers to chimney bressumer. Timber roof retains massive A-frame trusses with trenched purlins; the collar beams lie below attic floor level which also has an ancient timber door securing the (formerly) external opening. This secure arrangement reflects the use of Ty-Isaf for a maltster's business with a solid drying floor (concrete?) in this attic storey. Later trusses to S range with dovetailed collar beams and trenched purlins. A modern panelled room has been created in the ground-floor of this range.