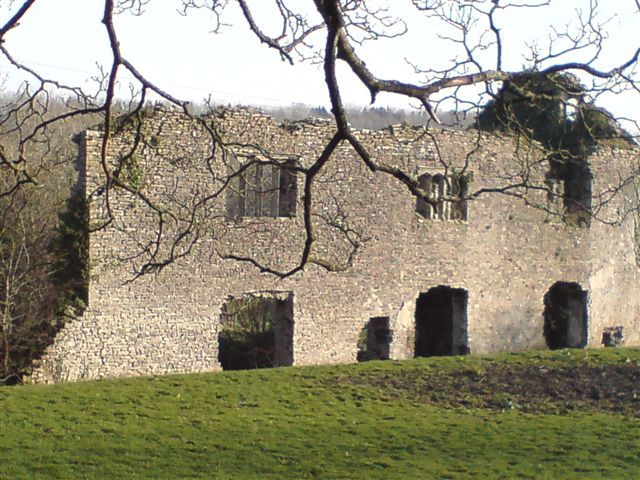 Location: Located SW of the churchyard of Llantrithyd parish church, fronting the Nant Llantrithyd to the SW.

Thought to have been built for John Thomas Bassett, Sheriff of Llantrithyd in 1546. The house was left to his daughter, Elizabeth, who married Anthony, younger son of Sir Rice Mansell of Margam. In 1586 the house became the seat of the main branch of the Aubrey family when Mary Mansell married Thomas Aubrey. In the C19 the male line ended and the house fell into ruin. A full historic account is contained within the RCAHMW Inventory of Ancient Monuments of Glamorgan, The Greater Houses. Vol. IV, part I.

The house consisted of a double pile main block with adjoining wings to the SE and SW, all of two storeys with attics. The hall was flanked by a parlour crosswing on the SW and a kitchen crosswing on the SE. In the C17 a well stair and parlour block were added to the N of the hall to create a double pile plan. The house was built of local limestone and sandstone for the window details.

The hall largely lacks external features, both gable end walls of the hall have collapsed. Part of the S elevation stands full height with 3 aligned openings. Nothing of the SE wing survives except for the foundations. The W elevation shows the remnants of the 2 storey porch. The W elevation of the NW wing stands to full height, lit by a 3-light mullion window to the second floor. The N elevation has four large empty openings to the ground floor with two surviving 4-light mullioned windows to first floor. The only remaining part of the E elevation is at the N end which stands to full height with four staggered openings. The attic light retains its mullion and transom under a relieving arch.

Remnants of ruined outbuildings are located to the south of the house together with C17 garden features; to NE is the walled enclosure of Llantrithyd Park.

Listed at grade II for its special interest as the remains of a substantial C16 gentry house and for group value with the parish church of St. Illtyd.