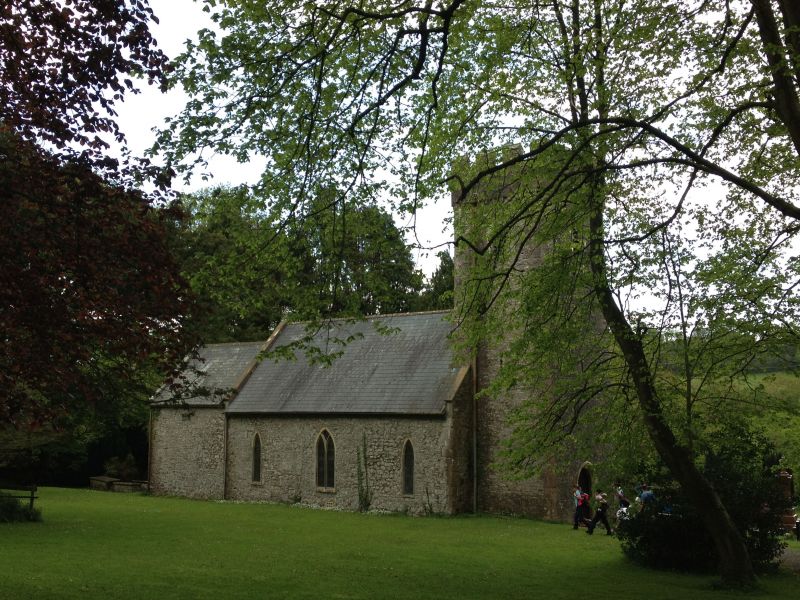 Location: Located at the centre of the Village, W of Llantrithyd Place.

St Illtyd and has C12 origins. The chancel and nave were rebuilt in the C14 along with the heavily battered tower. In the C18 the tower was restored and a gallery was inserted at the W end of the nave accessed from the S face of the tower. In 1897 the church was extensively restored under John Pritchard, diocesan architect when the gallery was removed along with the rood loft and the south porch was also rebuilt. The church was re-floored, re-pewed and re-fenestrated and the rood loft doorway was removed from the N wall of the nave and built into the tower wall.

Decorated church consisting of chancel, nave, south porch and embattled Western tower. Constructed of random limestone with the roofs of the chancel and nave being clad in natural slate. The E window is dated 1656 and is of 3-lights with rounded heads rising in the middle with a hollow-chamfered hoodmould beneath a relieving arch. On the S side of the chancel at the E end is a C19 2-light round-headed window set beneath a square hoodmould with hollow chamfer. To the W of this is a prests door with 4-centred arch and complexly moulded square hoodmould over. The W side of the nave has a 4-centred dressed stone doorway with plain chamfer and diagonal stops set at first floor level. The S porch has open eaves with shaped rafter feet and a narrow pointed doorway with no mouldings and a 2 centred inner doorway with broached stops beneath a relieving arch. An A frame roof with collar purlin and early C16 moulded principal rafter. The rest is C19. The wallplate is embattled with carved foliate motifs to face with benches either side. The tower is square and battlemented with a corbel table below. It has louvred, broad window to each face at upper level, with 2-light round headed window on the S face. The W doorway is C19 with complex roll moulding and square label stops with keel stops to jambs. The N face of the nave is lit by a 2-light window with a diamond to the head flanked by single-light lancets. Evidence of earlier fenestration remains, now blocked. The N elevation of the chancel is unlit. Set to S of tower is a substantial medieval fragment stylistically c1200 with continuous blind arcading and eroded capitals; although its shape suggests a font it is more likely that it was formerly the base of a medieval cross.

The church is bounded by a 1.5m high coursed C19 rubble wall with cock and hen coping.

The pointed chancel arch is C14 with continuous moulding. On the N side of the chancel stands a large and exceptionally fine monument to John Bassett, his wife with Sir Anthony Mansell and his wife Elizabeth, younger daughter of John Bassett surrounded by their 7 children. The tomb dates from the late C16 and is in Renaissance style, attributed to Richard Twrch of Glamorgan. The chancel and nave have C19 arch braced roof. The rood screen is of late C14 date and of Perpendicular style. Since restored in the C19. The nave contains a number of fine monuments relating to the Aubrey, Bassett and Mansel families.

Listed at Grade II* as a good example of a restored medieval church with an outstanding monument to the Bassett family.