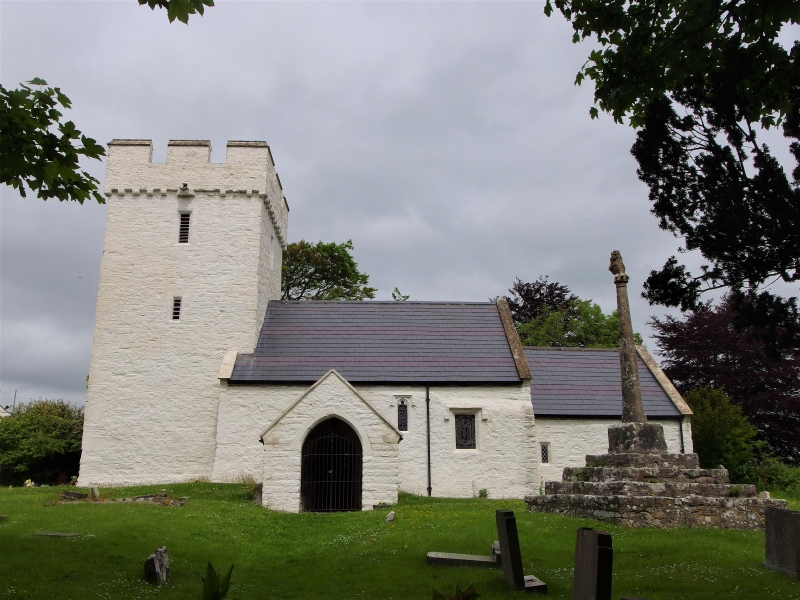 Location: On the eastern boundary of the community set to the south-east of Porthkerry village green.

The church has its origins probably in second half of the C13 (its first mention is from 1254), and much of the walling is still medieval, although restored. The tower was added in the the late C15 or early C16, as was the porch, although this was much rebuilt in 1867. There was a major restoration in that year when the east wall of the nave and the chancel arch were rebuilt, the vestry was added and the church re-roofed. The top of the tower was rebuilt in 1958.

Built of roughly coursed lias limestone rubble (more carefully squared only to the north vestry), Welsh slate roof with colour banding and some modern patching. Nave, chancel, south porch, square unbuttressed west tower, north vestry. The nave is wider than the tower. The south wall has a partly Victorian gabled porch in blue lias on the left, within this a fine mid C18 6-panel door with raised-and-fielded panels. To the right of the porch is a single light window with cusped head and dripmould, then a larger rectangular C17 type window with dripmould which appears to have been inserted into what was a larger window opening. Coped gables, the east gable is much higher than the chancel. The south wall of the chancel has a blocked pointed arch priest's door with a single light pointed window to the right. The east gable has a 2-light window with trefoil heads and a quatrefoil above; this is a Victorian Bath stone restoration of a C15 original. Above this is a coped gable with apex cross. Blind north wall. The nave north wall is covered at the east end by the projecting Victorian vestry which has a single light window facing east and two in the gable facing north. The west end of the nave north wall is blind. The tower has three stages with a pointed arch door on the west wall with a C15 2-light window with dripmould above it for the ringing chamber. Small louvred opening on the south wall for the stair. The bell-chamber has a plain single louvred opening on each face. Restored castellated parapet on corbels.

The interior is wholly plastered and painted so that the claim that the chancel arch was rebuilt in brick in 1867 is not verifiable. Timber chancel screen with simple Perpendicular tracery and linenfold panelling, rather rebuilt. Octagonal stone font. The tower arch also looks like a break-through with only the plainest of mouldings at the top. Victorian furnishings. Fine early C17 incised grave slab with excellent lettering to Reynolde Portrey, died 1629, on the north wall. Plain principal rafter roof of 1867, when the thatch was replaced. There are six bells, 1550, 1695, 1695, 1879, 1950, 1950.

Included and highly graded as a medieval church with good features.