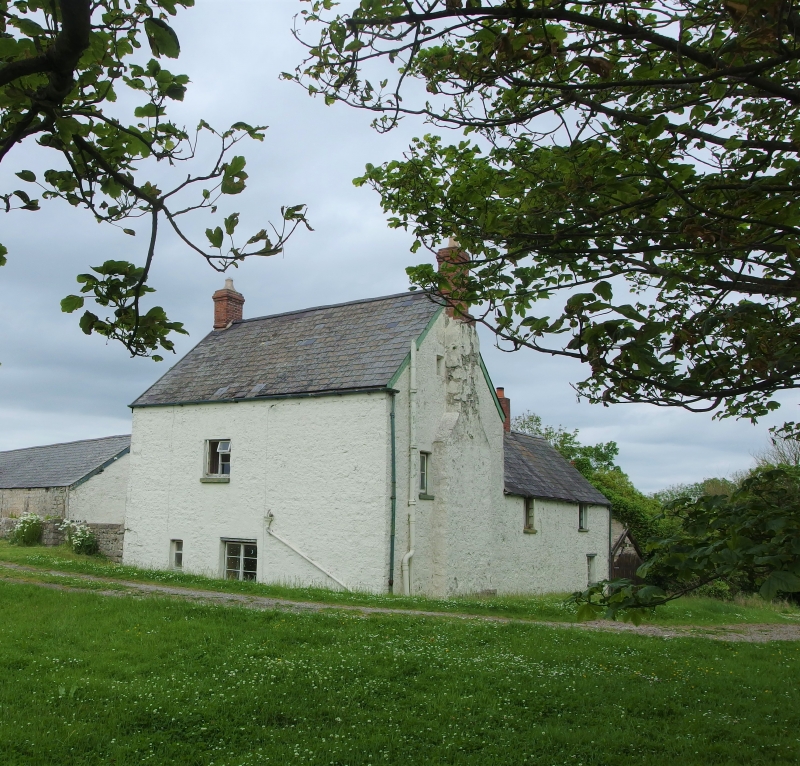 Location: On the north side of the Porthkerry village green abouth 50m from the Church of St Curig

This is a remarkable late medieval, i.e. probably early C16, house, which survives in a very complete state considering its age. It seems likely that it was built as a parsonage, suggested by its limited but well finished accommodation of a type seen elsewhere in the Vale (c.f. The Old Rectory, Llangan for example). As well as the architectural detail the building type is considered to point to a pre-Reformation date as the celibate priest required no more space than was offered here. This rectory appears to have had a wing from the start, presumably a service room on the ground floor, while the priest would have lived on the first floor of both main block and wing. The kitchen wing was extended, probably in the mid C19, and possibly as a result of the rector moving to the new rectory nearby, now the Egerton Grey Country Hotel, to where he moved in 1839-40. The building now became, and remains, a farmhouse and was given some changes at that time and later, new windows etc. as well as the addition of the usual farmyard ranges. It remarkably retains the whole of its medieval envelope with the only external changes being the replacement of the windows and the rebuilding of the top of the chimney stacks. There were also internal alterations probably at this time, for details see Interior.
The house is unusually well documented. It was first noted in the Stradling family correspondence in 1576 and is shown on the Penmark parish map of 1622. In the 1636 Glebe Terrier it is described as having three hearths (but see Interior) and this also mentions the outbuilding.

Built of local rubblestone, wholly rendered and painted; Welsh slate roofs with red brick stacks. Two storeys and garret with the rear wing two storeys only. Tall rectangular single depth house with rear wing, also single depth. The house is entered on the inner angle of the L, on the north side, protected from the wind. The main south elevation is partly sunk into the ground and has two windows on the ground floor and one above. All are small C20 casements in what must be original but altered openings. Steeply pitched roof with rebuilt gable stacks. The left gable is blind; the right gable has a large external stone stack with offsets. This has a small casement window on either side at first floor level and a tiny window on the left of the stack for the garret. The rear elevation of this block is covered on the left side by the rear wing and all that can be seen is the upper part of the projecting mural stair and blind walling above the added lean-to porch; within this is a chamfered stone Tudor arch doorway. The rear wing has two bays on the entrance side, the first with a 3 3 pane wooden casement on each floor and, to the left, a smaller one and then a plain doorway, blind wall above. The rear wall has two casements above and one to the right below, all 3 3 as before. The walling shows by a straight joint that the right hand bay is an extension, but this cannot be seen on the front wall. The wing has red ridge tiles, and a brick stack marks the end of the first build.

There is direct entry to the main ground floor room, which is of uncertain original use since it would appear to have been unheated, the fireplace is Victorian and the chimney looks as if it has been added to the gable wall on the outside. The room was probably a store room and perhaps for parish business, with the lower hall for the servants in the rear wing. Two chamfered 2-centre arch doorways lead out from it, the one in the north east corner to the rear service wing and the taller, higher status one, which retains its iron pintles, to the mural stair and the rector's private chambers above. The ground floor originally had a lower ceiling as is clearly evident on the upper floor. The stair, which has the corbelled roof usual for this type, arrives at another tall 2-centred doorway and there are two additional steps up to the higher floor level of the C19 alteration. The first floor room was clearly an upper Hall, but was always ceiled, see below. On the west wall the hood of the grand fireplace survives, a large oak lintel supported on two massive stone corbel brackets. Yet another 2-centred arch doorway leads to the rear wing, presumably the priest's bedchamber or maybe an oratory. There is some evidence of another stair rising to the garret, which was certainly lit, but this must have become redundant when the ceiling was raised to compensate for the raised floor, making the roof space a mere attic. This has a 2-bay roof with a single principal rafter truss which is very plainly finished indicating that it was not intended to be a part of the upper Hall, such as is found at The Old Rectory, Llangan (qv). There are two tiers of trenched purlins and a ridgepiece with the secondary rafters morticed into it. Although some timbers were replaced when the roof was reslated all are oak and many of them appear ancient. One bay of the roof space has, at some time, been separated off as a room, for the timbers are all whitewashed and there are the remains of the closure boarding on the main truss. This was before the reslating since the slates are neither torched nor painted themselves. The rear wing has, on the ground floor, the current farm living room, and no ancient features are visible, although the large fireplace is said to survive behind the modern one. The original kitchen was a detached one, see Outbuilding. The current kitchen is housed in the C19 extension. The roof of the rear wing was not available for inspection.

Included and highly graded as an important late medieval rectory which retains a number of good architectural features.