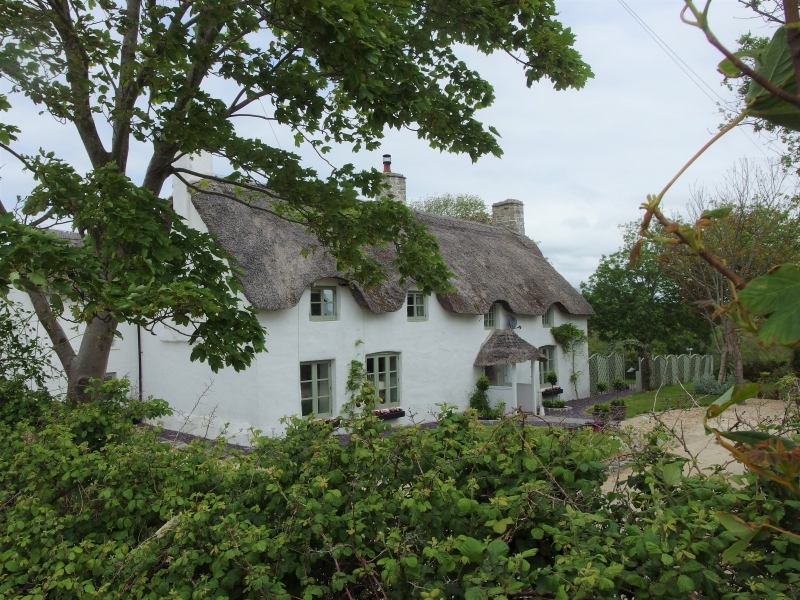 Location: On the north-east side of the road, opposite the south-east end of Cardiff airport runway, and beside the lane leading to Egerton Grey Country House Hotel.

This house began in the early C17 with a two unit gable entry plan, these are the two window bays to the west of the main entrance. This was added to in the later C17 with the parlour to the right and giving a hearth-passage plan. The rear service wing was probably added in the C18 as it is a full two storeys in height. There have been only minor alterations since then in the Victorian and later periods but these have hidden any other historic interior features which may survive.

This house is very difficult to describe accurately because of the heavy garden growth. Built of local rubblestone with whitewashed rendering, thatched wheat-reed roof with ridged patterning and deep eyebrows in the West Country fashion, three square rubble stacks. Two-storey, L-shaped frontage, a single depth range with a rear wing.
The main elevation faces south and has four windows, wooden casements with glazing bars. Two windows to the left of a plain door under thatched bonnet on wooden supports, and another window to the right. The first floor casements have been replaced, the lower ones are C19. Gable end stacks and the third is to the left of the door in the hearth-passage position. Attic windows in the east gable on either side of the stack. Rear wing a full two storeys with a lateral stack.

The main entrance is into the cross-passage with the gable entry to the original two cell house on the left. This unusually retains its partition for the inner room, moulded beams, 1930s fireplace with the former position for the stair on the left and of the entry on the right, both now blocked. The current stair was inserted into the cross-passage probably in the mid C19 but it utilises the upper part of the old stair. None of the other rooms have visible historic features and only the feet of some of the principal rafters can be seen.

Included as a C17 farmhouse which, despite alterations, has retained its character and its thatched roof.